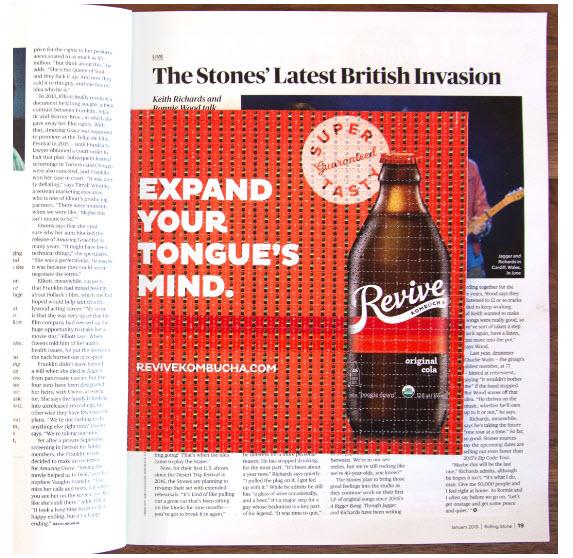 In a creative approach that might have some older consumers flashing back to the '60s, Revive Kombucha is running a magazine ad insert printed on LSD blotter paper...minus the LSD.

The insert will appear this month in 26,000 San Francisco-area copies of Rolling Stone — the rock bible that was launched in 1967, just a few months after the city’s legendary, LSD-friendly Summer of Love.

San Francisco is Revive’s largest market -- and a '60s throwback theme would certainly seem well-timed, what with the city gearing up for the SOL’s 50th anniversary.

And just in case all of that wasn't hippie-redolent enough, the insert was printed with vegetable ink, on edible blotter paper, by Zane Kesey. Kesey, who lives in rural Oregon, is -- yes -- the son of Ken Kesey, author of “Electric Kool-Aid Acid Test” and “One Flew Over the Cuckoo’s Nest,” and a sound engineer for The Grateful Dead.

The campaign, “Expand Your Tongue’s Mind,” targets both kombucha drinkers and soda drinkers, and aims to promote Revive’s seven flavors -- which include exotic varieties like Turmeric Ginger Citrus and Cucumber Mint Lemon, as well as Original Cola.

“Revive’s flavor profile is completely outside the category norm, and this seemed like a great way to start that conversation rolling,” says Jonathan Schoenberg, executive creative director at TDA Boulder, which created the campaign as its first work for Revive.

The insert's design evokes the original SOL blotter sheets’ tiny, repeated patterns. But in this case, each of the perforated sheet’s 900 squares or tabs is used to show one of Revive’s flavors, rather than hold an individual hit of LSD.

The campaign also includes “wildposting” of similarly themed ads around San Francisco, with emphasis in (you guessed it) the Haight-Ashbury neighborhood.

To date, Revive’s growth has been driven mostly by word-of-mouth. In fact, this is the brand’s first advertising outside of Sonoma County, and by far its largest campaign to date. A new execution will target Southern California later this year, according to the company.

“We’ll be turning our marketing efforts up this year with our first fully integrated campaign, including out-of-home, digital, in-store and an aggressive sampling program,” confirms Revive Kombucha’s vice president of marketing, Josh Mohr. The brand experience is “a one-of-a-kind, super-tasty trip, and our marketing is aimed at creating as many Revive experiences as possible,” he tells Marketing Daily.

Launched in 2010 by entrepreneurs Sean and Rebekah Lovett, Revive attracted a $7.5-million round of funding in 2017, led by Peet’s -- which acquired the majority stake last year. The Lovetts retain a minority position and continue to lead the company.

The brand, which now shares Peet’s’ sales and distribution network (grocery and on-premise, as well as coffee bar locations), is most widely available in California, but expanding its presence in other regions of the country, as well as its brewing operations.