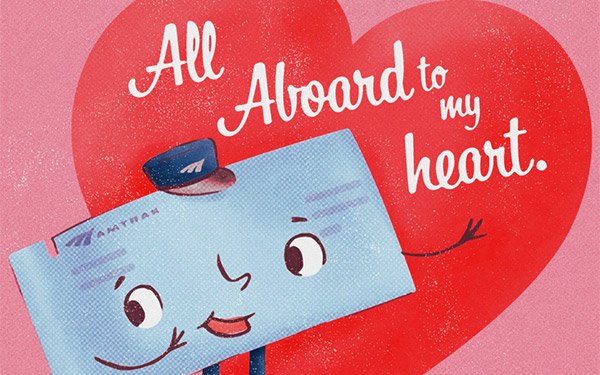 Is there anything more romantic than a long-distance train? Think of Cary Grant and Eva Marie Saint on the old Broadway Limited in North By Northwest.

With that in mind, Amtrak has launched a Valentine’s Day promotion, offering riders two tickets for the price of one. The effort is part of a broad campaign that also includes e-Cards and loyalty brand tie-ins, and is being supported with email marketing and in social media and the Amtrak website.

Travelers can buy seats on any train between March 25 and July 29, with no blackout dates.

The e-Cards, which are being offered in social channels, include such pithy train puns as:

Will U B My Valen-train?

You make my heart ACELA-RATE

All Aboard to my heart

Then there’s the e-Card featuring a pair of canine sweethearts: “I knew Amtrak let pets on trains, but angels too?”

The Amtrak team had heard many stories about people getting married or meeting their future spouse on trains. So it created “a Valentine’s Day campaign to people who love trains,” says spokesperson Jason C. Abrams.

The e-Cards, which can be shared in social channels, are designed to be cut out and given to one’s heartthrob.

The email campaign promoting the fare deal is going out to two Amtrak email lists — to loyalty program members and to people who have signed up for fare- and travel-related updates. The numbers were unavailable.

In addition, the loyalty club members also have received emails offering points in Valentine’s Day brand tie-ins. One was with 1-800 Flowers.

Valentine's Day is almost here,” the email says. “Send beautiful bouquets and earn 30 Amtrak Guest Rewards® points per $1 spent with 1800Flowers.com® and their Family of Brands."

It continues that shoppers can find "fruit baskets, sweet treats and more."

The email is also personalized with the person’s name and point total — i.e., Joe,10,000 points.

There also was a tie-in with Teleflora, headlined, “Enjoy 1,250 on every purchase through February 14.”

If this year is typical, the busiest Valentine’s Week train ridership will occur on Friday. Since 2010, the average has been 117,815 passengers.