Cadillac Gets Flirty With Competitors For V-Day 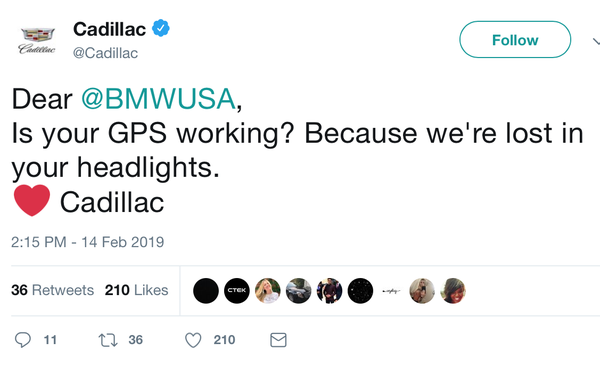 Who says flirting is only for humans?

Cadillac took to social media Thursday afternoon with love letters for its biggest competitors, and several played along.

Spreading positivity and some cheekiness, Cadillac via its creative agency Rokkan, posted multiple tweets with targeted pick-up lines to its biggest competitors like Mercedes Benz, Lexus, BMW, Audi, Tesla and others.

Some of the brands, like BMW (“That’s because our angel eyes are out of this world!”), Lexus (Aren’t you a bit old for us? *swipe left*) and Jaguar (“Should we Escalade this to the next level?”) joined in on the fun with some clever comebacks.

Who knew there were so many car-related ways to flirt?  Jaguar responded, “Power-sliding into the DMs” in response to Cadillac’s flirty “Just don’t leave scratch marks.”

Cadillac direct-messaged: "Dear @Audi, Say Escalade with that beautiful German accent,"  "Dear @Lexus, We don't care what anyone says. We think your big grille is really attractive" and "Dear @MercedesBenzUSA , Long distance can be difficult, but we can make it work."

The Twitterverse responded as well with comical comments like “Get a Garage!” and “Jaguar and Cadillac over here sexting and I can’t even get a text back.”