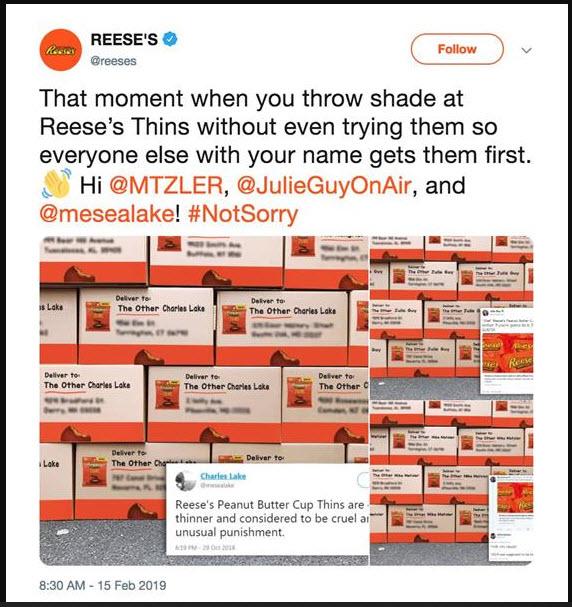 In the spirit of its mischievously rebellious, ongoing #NotSorry campaign, Reese’s has turned the tables on some of its own fans, with a social media and sampling prank.

Last October, when the brand first announced that it would be releasing a new extension early this year, called Reese’s Thins, some fans of course expressed skepticism on social about the product, which is 40% thinner than a regular Reese’s cup.

The thinner version, available in milk and dark chocolate, is meant to be “small enough to eat in two bites, but large enough to satisfy your desire for Reese’s,” in the brand’s own words.

Now that the Thins are starting to hit retailers (they’ll be available nationwide in March), Reese’s is looking to stir up some initial buzz by teaching the prematurely disappointed fans a lesson.

The brand sent exclusive, first-taste samples of the Thins to hundreds of people who happen to share the names of the doubters — but not to the doubters themselves.

Then it bragged about its revenge on its own Twitter channel (shown), showing screen grabs of the doubters’ posts from last fall.

The brand’s tweet: “That moment when you throw shade at Reese’s Thins without even trying them so everyone else with your name gets them first. Hi @MTZLER, @JulieGuyOnAir and @mesealake! #NotSorry.”

“We are willing to prank some of our fans to prove they are 40% thinner and 100% delicious,” says the brand’s senior manager, Jack Wilder, acknowledging the hoped-for engagement factor.