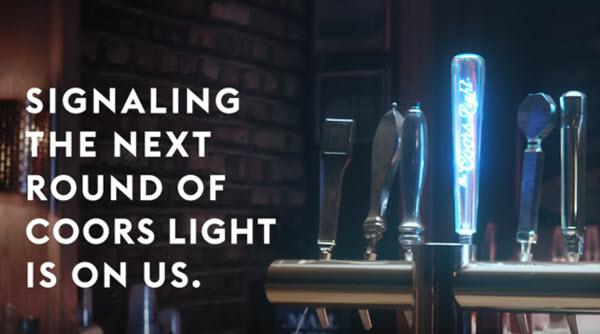 In the latest installment of what’s become an ongoing “corntroversy,” Coors Light is literally tapping technology to counter Bud Light ads focused on the use of corn syrup in some brands’ brewing process.

The MillerCoors brand has created a beer tap handle for use in bars — dubbed "The Coors Light” — that will display a blue light each time it detects Bud Light “negative activity” on social or broadcast channels, which in turn triggers free beer.

When the light comes on, all legal-drinking-age patrons in the bar will be eligible for up to two free Coors Lights, on MillerCoors. (As a “responsible drinking” precaution, participating patrons will need to wear supplied tracking wristbands to ensure that each is served only two beers.)

The taps will be installed in just five bars — one each in New York, Philadelphia, Dallas, Omaha and Las Vegas — and will be active only during select college basketball games on March 22 and March 23.

However, other key Coors Light bar accounts across the country will participate by buying a round of Coors Light for patrons each time a Bud Light ad comes up on their TV screens while the college games are being broadcast.

As a campaign video (below) explains, the premise of the Coors Light March Madness-timed promotion, dubbed “Refresh the Conversation,” is that the brand’s own poll showed that most premium light beer drinkers would “rather enjoy a cold, refreshing beer rather than continue to worry about what’s in it.”

That, of course alludes to the light beer brew-haha set off by Bud Light, which announced it was adding an ingredients label to its outer packaging, then used its Super Bowl spots to launch a campaign implying that Coors Light and Miller Lite are inferior because they use corn syrup in their brewing process.

The responses explained that in fact, “a corn-derived sugar or corn syrup called dextrose” is used in brewing many beer brands (including craft varieties) “because it cleanly and efficiently converts to alcohol during fermentation and has a neutral taste.” It also explained that “none of these sugars are in the final product” — and that Bud Light parent Anheuser-Busch InBev uses the same ingredient in some of its own brands.

The feud over Bud Light’s campaign has also interfered with a multimillion-dollar, brand-agnostic campaign, intended to help boost the long-flagging beer category, which had been under discussion among MillerCoors, AB InBev and Constellation Brands.

According to The Wall Street Journal, in February, MillerCoors declared that “the initiative should be paused” due to Bud Light’s ongoing campaign. The article quotes MillerCoors communications chief Pete Marino as stating that it would be “a waste of time and money” to work on such a campaign “while the dominant industry leader is spending millions of dollars demonizing beer ingredients,” and that “ABI’s misguided attempt to gain a competitive advantage threatens to single-handedly set back the health of our category for a long time.”

Meanwhile, MillerCoors is spreading the word, via media outreach and a corporate blog, that sales of Bud Light, America’s top-selling brand, have declined 8.8% since the Super Bowl, according to Nielsen all-outlet and convenience store data through March 2.

AB InBev says the Bud Light campaign is achieving its goals of increasing consumer awareness of beer ingredients and contributing to improving the performance of its overall brand portfolio. The company’s sales to retailers were down 2.7% last year, but it recently told Ad Age that its total share of the beer category has been increasing since Q1 2018.