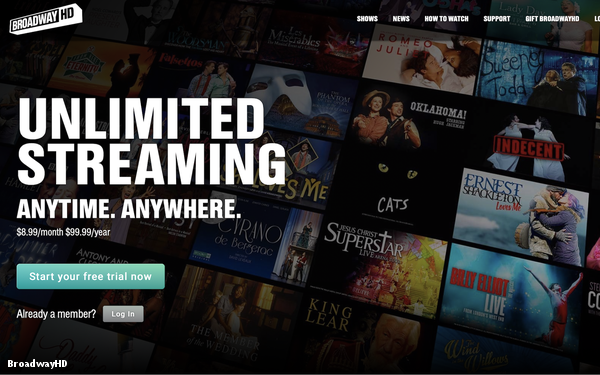 Look no further than New York, the live theater capital of the world, where Broadway shows grossed nearly $2 billion last year. The problem for many consumers, of course, is that you have to be in New York City to see a show -- and even when you are, with ticket prices averaging over $100 each, shows simply aren’t as accessible as many producers and actors would like them to be.

At the same time, the popularity of musical theater-themed programming is high, with movies like “Pitch Perfect” and “La La Land,” and TV shows like “Crazy Ex-Girlfriend.”

That opportunity was where BroadwayHD came in. A subscription streaming video service, it now has nearly 300 full-length Broadway shows.

“This popularity and technology converged at a time when we felt that there would be enough of an audience out there to make it accessible and affordable, because Broadway is a brand in itself,’ says BroadwayHD co-founder Stewart Lane.

"The power of the Broadway brand, globally, is huge,” adds BroadwayHD’s other co-founder Bonnie Comley.

BroadwayHD launched with around 100 shows, and that number has since swelled to 300, with more being added monthly. The service has also live-streamed some performances, and is now available in 20 countries.

“The mandate was to recreate the theatergoing experience, including the audience,” Lane says. “Everything except waiting on line for the bathroom during intermission.”

At the same time, the company is embracing its role as a smaller player in a much larger media ecosystem.

“We don’t expect to compete with the streaming giants in terms of the number of hours -- it is a niche market,” Lane says, noting that Netflix and other streaming video platforms have enormous libraries, although they are often lacking in live theater options.

That being said, the company is open to bundling possibilities, such as being included in a bundle of video content, but Lane and Comley say they are happy to have that direct-to-consumer relationship.

Similarly, while they don’t have any immediate plans to add sponsorships or advertising to the platform, they remain open to the possibility… provided it doesn’t interrupt the experience for viewers.

“If we were to put out any sort of sponsorships or advertising, it would be before a show,” Comley says. “We have no interest in chunking up the content. There won’t be any commercials in the middle of anything.”

Whether or not to lean into ads is a question being asked across the streaming landscape, from niche players like BroadwayHD to major giants such as Netflix.

“The way to get it right is to get it right by the consumer,” said Tim Castree, North American CEO of GroupM, speaking at an upfront event for the video ad firm FreeWheel last week. “I think it is going to be a hybrid [of subscriptions and ads], ultimately the consumers will decide… ad-supported content is not going anywhere, it is all a matter of getting the delivery and ad loads right.”

Ultimately, as consumers embrace streaming, giants like Netflix and niche services such as BroadwayHD are poised to benefit -- even if those niche subscriptions may be splintered.

“Everyone will have Netflix and/or Amazon -- everyone will end up with maybe four subscriptions: Amazon, Netflix, and then they will go the niche, whether it is anime, or horror, or theater,” Comley says. “I think for people that love Theater, we will have a place in that four. There’s a place for us, but we’re not knocking out Netflix anytime soon.”