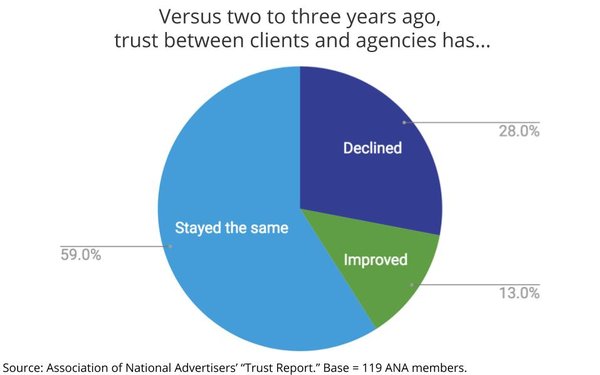 Asked to describe how the level of trust between marketers and their agencies has changed over the past two to three years, more than twice as many members responding to an Association of National Advertisers’ survey said it has gotten worse vs. improved.

That’s one of the top findings from the just-released “Trust Report” from the ANA, which comes two to three years after a series of whistle-blowing events and in depth interview-based studies revealed an acute loss of trust among big marketers, especially with regard to non-transparent media-buying practices and agency kickbacks and compensation methods.

While 59% of the respondents said the trust sentiment is about the same as it was at that time, 28% said it has actually declined -- more than twice the percentage (13%) who said it has improved.

In conjunction with the release of the report, the ANA also unveiled a new “Trust Consortium” during the opening day of its Advertising Law & Policy Conference in Washington, DC his morning.

The “consortium is designed to help marketers advance the interests of their brands and provide them with the tools they need to keep supply chain participants honest and transparent,” ANA CEO Bob Liodice said in a statement, adding: “Trust is the foundation of growth and will be restored through full transparency and integrity — not through realignment or pre-negotiated positions.”

The ANA said the consortium will focus on creating white papers on best practices and key issues, FAQs, templates, and industry standards for marketers, agencies, and suppliers.

“Its focus will cover both demand-side and supply-side platforms, including media buying agencies, trading desks, and publishers,” the association said.