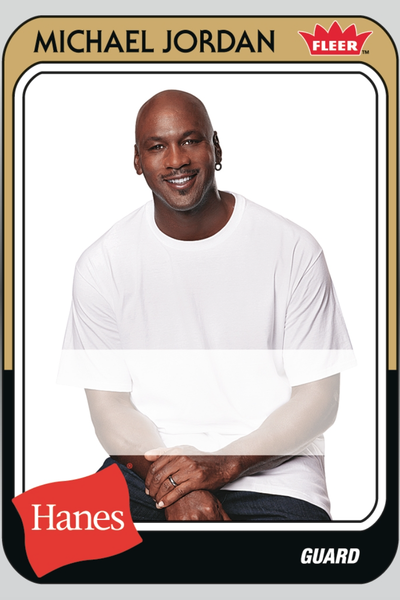 Hanes is celebrating 30 years with Michael Jordan as a spokesperson with trading cards featuring the basketball legend.

A total of 170 different Fleer trading cards have been produced by The Upper Deck Company, each with a picture of Jordan from one of his Hanes advertisements on the front and vital statistics and fun facts on the back. Cards are inserted randomly in five-card packs.

Television spots supporting the promotion will be aired during March Madness on CBS, TBS, TNT and TruTV; on ESPN, CBS Sports and other cable sports networks; and on FX, MTV/MTV2, ION and a variety of other cable stations.

The partnership between Hanes and Michael Jordan began in 1989 with the star player telling  consumers that, "Nothing else feels so right." Jordan scored the 10,000th point in his basketball career and hit "The Shot," one of the most dramatic NBA playoff-series winning buzzer beaters in the history of the sport.

“Michael has always had his pick of brands to endorse,” states Sidney Falken, chief branding officer for HanesBrands. “Through the years, we’ve certainly benefited from Michael’s enduring popularity with such a wide audience. MJ continues to be one of the most recognizable people in the world.”

A limited number of bonus packs with trading cards are available on the Hanes website and across all retail channels -- from dollar to department stores, both in store and online, including Kohl’s, JC Penney, Walmart, Meijer, Kmart and Dollar General.