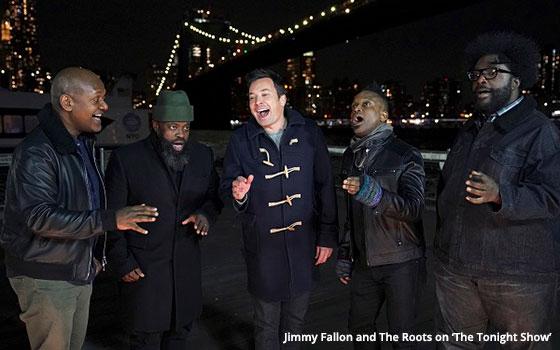 Before you use this past Monday’s “Tonight Show” on NBC to judge the picture and audio quality of video shot on the new Samsung Galaxy S10+ smartphone, a word of caution.

The show was “filmed entirely on the Samsung Galaxy S10+ phone,” according to a description of the filming that appears under the video of the complete episode on NBC.com.

At first glance, the results were quite good, as one would expect from a TV show that is obligated to maintain a high standard of what was once known, and probably still is known, as “broadcast quality.”

Certainly, more than one smartphone was used. In fact, in the show's opening scene, Fallon announced that Samsung had provided the show with “a bunch” of the phones (although he did not specify how many).

For this unusual, program-length stunt, the entire show took place outside the confines of Jimmy Fallon's usual studio at 30 Rock. Instead, Fallon was filmed by smartphone as he visited various spots in New York City that he said were among his favorites.

This provided opportunities for the Samsung Galaxy S10+ -- which became available just a few weeks ago -- to show off its video capabilities in various environments.

These included outdoors at nighttime as Jimmy and the Roots sang “In the Still of the Night” near the Brooklyn Bridge (photo above), and inside an Irish Bar (Paddy O'Reilly's on Second Avenue), a comedy club (The Comedy Cellar on MacDougal Street) and the Italian restaurant in East Harlem known as Rao's.

While portions of each of these segments were flat (if not entirely dull), it is fair to say all of them were TV-ready. However, the TV Blog would caution anyone who thinks they can achieve these same results at home with their own Samsung Galaxy S10+ to think again.

One of the breaks during the online version of the episode revealed that aspects of the video had been enhanced in post-production in ways that are likely unavailable to most of us.

During this break, a voice was heard saying, “Tonight's episode is captured entirely on the Samsung Galaxy S10+.” But while this was heard, words on the bottom of the screen were seen that said, “Audio recorded separately. Video has been color-corrected.”

This would indicate that network-level sound equipment such as portable boom mikes and the like were used while filming was being done with a smartphone. This would imply that the audio quality of the Samsung Galaxy S10 on its own is far from broadcast quality.

This should surprise no one, but on the other hand, if a show is saying it is “filmed entirely” with one of these smartphones, most people would conclude the whole thing was produced with a smartphone, from start to finish -- including the sound.

The same goes for “color-correcting” the video in post-production. This is a normal step in the preparation of pre-recorded TV shows of all types for air. But here again, anyone thinking that the quality of the picture they saw on NBC Monday night was due to the proficiency of this Samsung smartphone would be wrong in that assumption.

As for the show itself, watching Fallon carry on with MMA fighter Conor McGregor at Paddy O'Reilly's was not nearly as much fun for those watching at home as Fallon seemed to be having in the bar in person.

Of course, his experience was being enhanced by the drinking of whiskey, which he seemed to enjoy very much. It was a brand that is being marketed by McGregor called Proper No. 12 Irish Whiskey.

Next, at the Comedy Cellar, Jimmy drank a beer with comedian and “SNL” star Michael Che. The beer brand was not visible, as the labels of their beer bottles seemed turned purposely so that they would not be seen on camera.

This might have been because the beer maker did not agree to have its brand promoted on the show. Let the record show that Jimmy seemed to enjoy this beer very much.

Then it was on to Rao's, which was the most off-putting of all the segments. This is a tiny elitist restaurant that is apparently accessible only to a select group of celebrities. You and I will never get in (unless there are any celebrities reading this, which is doubtful).

In fact, on “The Tonight Show,” owner Frank Pellegrino Jr. practically bragged that no one who is not famous will ever eat there. On this smartphone “Tonight Show,” Fallon also boasted about his many meals at Rao's in the company of various celebrities.

Before the show was over, Jimmy was seen enjoying more drinks -- this time at a jazz club called Django's. Fallon is indeed the life of the party -- even if it's a party we ordinary folk will never be invited to.

As an hour-long experiment in smartphone technology, this “Tonight Show” was not nearly as memorable as a 2015 episode of “Modern Family” in which the story was told completely via Claire Dunphy's MacBook as she interacted with her various family members in remote locations via their smartphones and tablets.