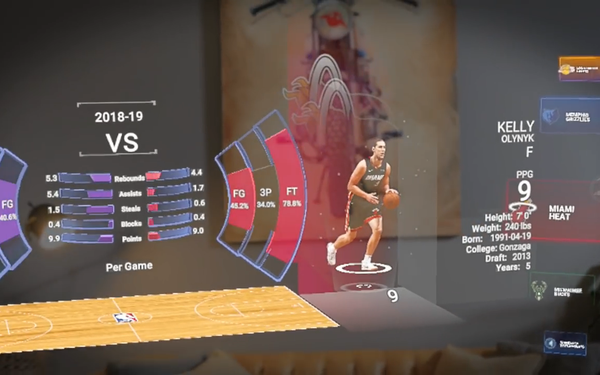 The National Basketball Association, Magic Leap and Turner Sports have teamed together to launch the virtual viewing of live games.

Fans can use Magic Leap’s Screens framework to pull up multiple virtual screens featuring live games as well as see game replays and highlights, all simultaneously.

Magic Leap’s spatial computing platform allows the creation of multiple screens in a location, such as in a living room.

The NBA app on Magic Leap allows the simultaneous viewing of live and on-demand video on multiple virtual screens.

Digital overlays, such as player statistics, can be added, as detailed in a Magic Leap video.

“The NBA, Turner Sports and Magic Leap have only just begun collaborating on bringing next-generation technologies to sports viewing,” states the new app feature announcement. “We plan to bring even more features and intimate experiences to fans. The app is just the start and shows how Screens is changing the game when it comes to sports and entertainment experiences.”