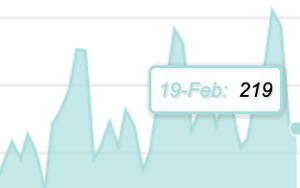 Demand for advertising inventory declined 5% in February versus the same month last year, according to the U.S. Ad Market Tracker, a collaboration of MediaPost and Standard Media Index.

The index, which is a composite of actual media buys processed for the major agency holding companies, declined to 218 in February from 230 in February 2018.

Year-over-year declines in the index are unusual, and February’s likely reflects comparisons with February 2018, which benefitted from NBC’s coverage of the Winter Olympic Games in South Korea.

In fact, the national TV marketplace had the greatest decline among the media tracked by the index, falling 8% year-over year.

The advertising contractions appears to have been mostly from the biggest advertisers cutting their budgets.

The top 10 ad categories declined 6%, while all the rest declined only 2%.