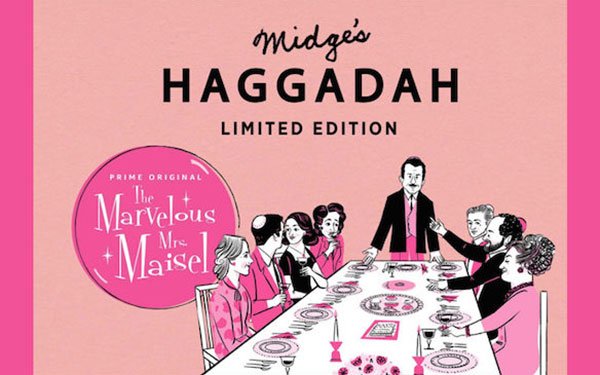 TV brand extensions have gone religious — at least where the Emmy-winning “The Marvelous Mrs. Maisel” is concerned.

Passover begins April 19 — so Amazon and Maxwell House teamed to turn the Seder into a brand-marketing bonanza targeting American Jews.

"Mrs. Maisel" is set in the late Fifties; its star, Miriam (Midge) Maisel, the proverbial nice Jewish girl with a chic, sardonic twist, is played by the incomparable Rachel Brosnahan. She is the mother of two baby boomers, who would have grown up on the Maxwell House Haggadah.

While Midge, given her groundbreaking comedy career, would probably prefer the more feminist, inclusive Haggadah now routine in many Jewish homes, she’d love the top billing of "Midge's Haggadah."

The booklet is a savvy marketing move.

Marrying nostalgia to an acclaimed Amazon series, which just began filming its third season on the Upper West Side, offers built-in appeal. Illustrations of Midge and other characters spice up the new version, alongside her personal notations, brisket recipe and various wine stains.

The limited-run Haggadah is available to those who order Maxwell House coffee via Amazon.com.

In fact, Maxwell House, owned by Kraft Heinz, is promoting the offer on social media and across Amazon's platforms. Billed as a “premium limited edition,” Maxwell House plans to distribute between 40,000 and 50,000 copies of the special Haggadah to customers.

Midge’s Haggadah builds on an earlier tradition: Maxwell House Haggadahs have been a holiday giveaway since 1932; at one time, it was a mainstay at American Seders. (The company secured the first kosher-for-Passover certification for coffee in 1923.)

Maxwell House says the Haggadahs are the country’s longest-running corporate promotion, reports Forbes. They have been used at White House Seders and given to Jewish soldiers on the battlefield. Its latest incarnation debuted in 2011, when the English translation was updated for 21st-century audiences.

But to remain true to the show’s ethos, Midge’s Haggadah traffics in retro appeal.

“There is an organic link between the Maxwell House and ‘The Marvelous Mrs. Maisel’ brands, and we quickly aligned on the idea of creating Midge’s Haggadah — a combination of the 1958 classic version and Midge’s amazing personality,” stated Naor Danieli, brand manager for Maxwell House.

“The Marvelous Mrs. Maisel” debuted on Amazon in 2017, starring Brosnahan, Tony Shaloub, Alex Borstein, Marin Hinkle and Michael Zegen. In 2018, it won Emmys for Brosnahan, Borstein, directing, writing and the coveted outstanding comedy series. This year, Brosnahan and Shaloub won Screen Actor Guild awards, as did the cast for outstanding performance by an ensemble in a comedy series.