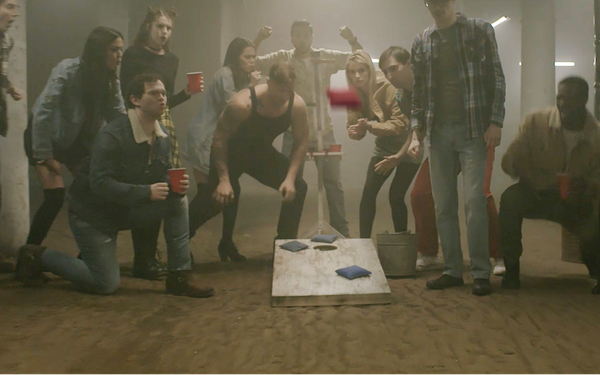 A 30-second spot, conceptualized by Red Roof and produced by Mills James, plays on the element of surprise with an ending voiceover, “Not what you expected? Neither is Red Roof.”

It is the first time the brand has run a spot on ESPN.  The multipronged campaign aims to show its support of the players and fans of Cornhole and capture share of this audience. The effort also includes sponsorships, promotions and PR.

Once a favorite activity at tailgates and backyard parties, Cornhole is coming out of its niche to become one of the country’s fastest-growing sports, according to the brand. Red Roof is embracing this fringe pastime and its players and fans with spots on ESPN, ESPN2, during the broadcasts of the American Cornhole League tournaments and streamed on ESPN3. The spots will run through Aug. 11.

Cornhole enthusiasts are a part of the growing community of what Red Roof calls “Passionists." These are the convention, conference and event travelers who are avid gaming geeks, compete in obstacle course races, follow Cornhole contests, and dress up in cosplay, along with following many other interests. Passionate pursuits are driving a segment of travel that Red Roof is addressing with targeted events and promotions.

Cornhole players and fans are looking for convenient and affordable lodging as they travel across the country participating in and following tournaments, says Red Roof CMO Marina MacDonald,

Red Roof is providing a 15% discount on stays for those who travel for tournaments with VP #625626. Select Red Roof properties are also reserving a regulation-sized Cornhole set for guests to enjoy, and providing opportunities for social media photos and sharing using the hashtag #RedRoofLovesCornhole and/or #PassionTravelwithRedRoof.

The motel brand is also partnering with the American Cornhole Organization to sponsor the Corny 40 Player program.

During The Ocho, a one-day event in 2017 for alternative sports on ESPN 2, more people in the 18-to-49 age group watched Cornhole than the competing game coverage of Major League Baseball, the WNBA or the final stage of the Tour de France, according to Sports Media Watch.