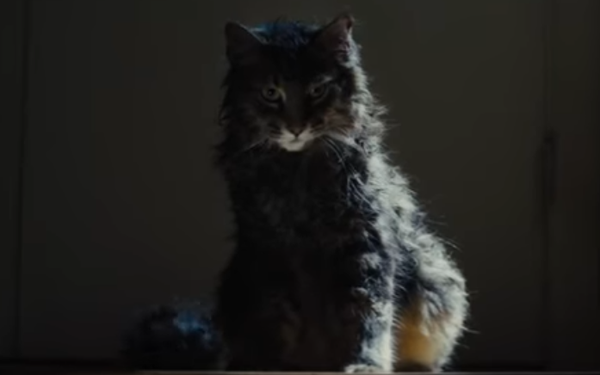 When Stephen King’s spooky “Pet Sematary” film (a remake of the 1989 version) opens on Friday, you should keep an on eye on the banner ad you see for the Paramount movie — because that ad will be keeping an eye on you.

Working with the AR/VR immersive ad platform OmniVirt’s new 3D Photo Ads, the banner for “Pet Sematary” shows a decidedly scruffy cat whose head seems to move a little as you do, as if it’s watching you.

It’s not quite scary, like the film reportedly is, but it’s a little weird and creepy — also not bad adjectives for a King novel turned into a horror film. Paramount claims to be the first film studio to use 3D Photo Ads to promote a film.

This new 3D Photo banner unit leverages existing 2D assets to create an immersive 3D experience, enhanced, if you want to, by tilting your smartphone over 20 degrees.

A spokeswoman explains that OmniVirt also added a scroll effect on the ads to enhance the image and encourage viewers to move around. But she also said people using their smartphones already tend to move their hands a little, enough to make that 3D Photo Ads effect work. (The ad also works from a laptop when a user hovers the mouse over the ad.)

“Pet Sematary is the perfect film for this new 3D Photo format,” states Brad Phaisan, OmniVirt CEO. “The film is super scary, so having a banner ad that literally comes to life in 3D on your phone is a great way to pop off the screen and thrill an audience.”

OmniVirt, founded in 2012 by former Google and YouTube employees, usually gets noticed for virtual reality or 360-degree videos, but the 3D idea, probably less sexy, is efficient and easy.

“3D Photo Banners are giving advertisers the ability to solve this with their existing creative and media spend,” Phaisan says, suggesting the technique is a way for marketers to beat “ad blindness” by creating a visual inducement to keep looking.

“Not every film has the budget or lead time to create a fully immersive 360° VR experience or augmented reality lens,” he says.

The 3D Photo creative was generated by adding depth to the existing movie poster and banner ads already created by the studio. OmniVirt can do that with any existing banner ad. It even has a spot on its website that lets you make your own.

Facebook also started a 3D Photos feature for users, so they could post Portrait Mode photos to their feed, but only using an Apple iPhone 7 Plus phone or higher. But Facebook can’t convert non-iPhone photos now, giving it limited value to advertisers.