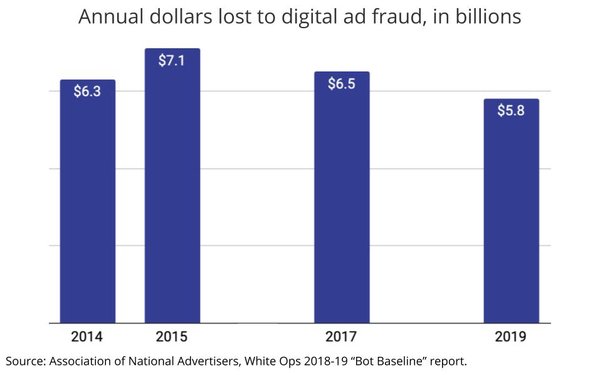 In the war on digital fraud, the ad industry is winning. That’s the conclusion of an in-depth analysis conducted by invalid traffic detection and prevention firm White Ops for the Association of National Advertisers (ANA).

“Economic losses due to bot fraud are expected to total $5.8 billion globally this year, but for the first time ever more fraud will be stopped in 2019 than will succeed,” finds the fourth periodic “Bot Baseline” report from the ANA and White Ops.

As significant as 2019’s estimated ad-fraud losses are, it represents an 11% decline from the $6.5 billion the industry lost due to ad fraud in 2017, the last year the analysis was conducted. The ad-fraud decline compares with a 25.4% increase in digital ad spending over the same two-year period.

“The decrease in ad fraud suggests that the war on fraud is winnable,” ANA CEO Bob Liodice said in a statement, adding: “Less fraud means more resources can be devoted to brand and business building.”

The ANA highlighted the following findings from this year’s report: