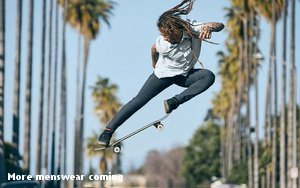 Buoyed by impressive sales gains, growing market share and a confident new CEO, Lululemon is taking giant steps off the yoga mat, expanding into the much larger world of wellness.

Unveiling an ambitious five-year plan that also calls for doubling its men’s apparel and digital businesses as well as quadrupling international sales, the company says it is opening a new store in Chicago that will be the prototype for this bigger thinking. The 25,000-square-foot location, due to open in July in the Lincoln Park area, will offer not just apparel but healthy food, drinks, yoga classes and a meditation room.

Movement tracking personalization technology and virtual reality meditation programs are also in the works, as the company sets its sights beyond the $115 billion global apparel market, to the $3 trillion world of wellness.

“We’re ready to build upon our success and embark on the next phase of growth,” says Calvin McDonald, CEO, in the announcement. (McDonald joined the Vancouver, Canada-based company last summer from Sephora.) “We believe Lululemon has a unique opportunity to push beyond traditional expectations to develop innovative products and become a fully experiential brand that creates compelling experiences for guests who want to completely live into the ‘sweatlife.’”

That includes more expansion into the office/travel/commute category, as well as selfcare, including skincare.

While the plans are bold, Jen Redding, an analyst who follows the company for Wedbush Securities, thinks they are reasonable. “We see Lululemon as building off of the company's profitable core (women’s bottoms) and making significant inroads into further penetrating running, training, and OTC (office, travel, commute) for both genders,” writes Redding, in a report following the company’s recent Investor Day event. She currently rates it as neutral.

Redding adds that Lululemon is collaborating with designers Roksanda and Robert Geller to enhance men’s, women’s and gender-neutral product offering.

Footwear is also a possibility. Stores have been testing the sale of APL, a pricey brand of performance sneakers, for several years, and executives told analysts further initiatives aren’t off the table, as the APL program continues to lure non-customers into stores.