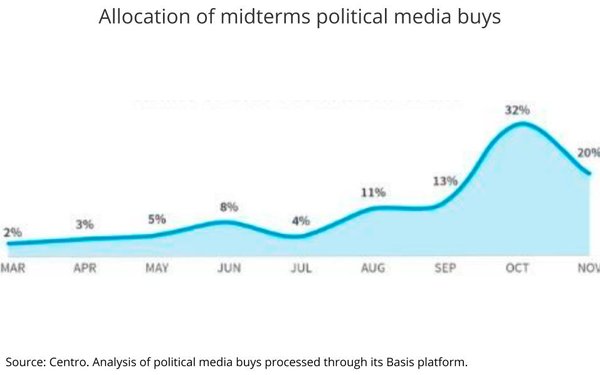 In what appears to be a political media-buying first, the majority of digital buys made during the run-up to the 2018 midterm elections were bought programmatically.

The finding, which comes from an analysis of buys made via Centro's Basis system, is anecdotal, but likely is indicative of underlying shifts taking place among political media-buying specialists and their campaign teams.

Basis is a SaaS-based platform enabling agencies, clients and media specialists to buy digital media either direct of programmatically. For some users, it's a self-serve interface, while others use it as a managed service operated by Centro's experts. But the net of all the political media buys is that 60% were purchased programmatically, while only 16% were "direct" buys negotiated with publishers. Twenty-three percent were social, and 1% search.

Centro executives said they were surprised by the shift to programmatic and expect it to continue to grow as campaign spending begins to heat up for 2020, including the Presidential campaign primaries and general election, but also across a host of local, state and federal elections.

What was surprising from the 300-plus campaigns analyzed in the 2018 Centro database, is that relatively few focused on connected TV inventory.

That was surprising because political media campaigns usually favor TV and digital video campaigns, according to Grace Briscoe, vice president of the Candidates + Causes group at Centro,

While Centro's Basis database does not process linear TV buys, Briscoe said only about 5% of total digital ad spending went toward connected TV buys. In terms of actual media weight, the connected TV buys were even less representative, because the format is disproportionately higher in terms of CPMs, and accounted for only 3% of total political media impressions.

"I would be shocked if connected TV isn't a much bigger factor in 2020," Briscoe says, adding, "It's just a question of how much we see it grow."

One thing she doesn't expect to see change is the timing of political media buys.

Though 2020 spending likely will heat up earlier due to the unprecedented number of candidates campaigning in the run-up to the primaries, Briscoe says the vast majority of spending will be in the last couple of months before Election Day (see 2018 month-to-month spending above). 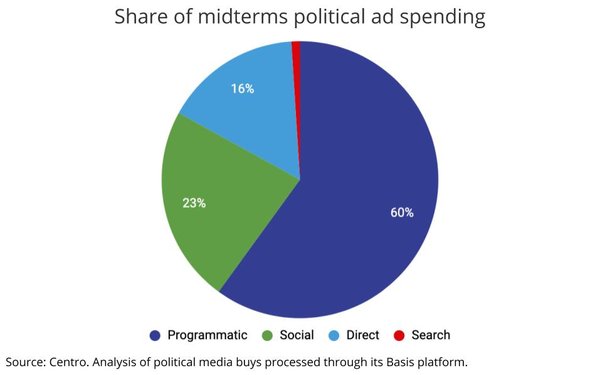