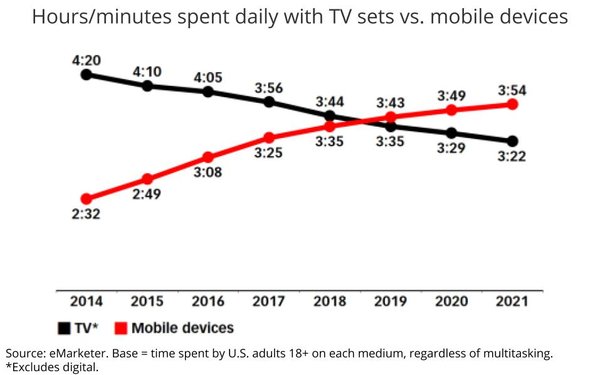 In another symbolic tipping point for the digital media economy, Americans' time spent with mobile devices has surpassed the time they spend on television sets for the first time this year.

The estimates, which come from eMarketer's latest update, project the average American will spend an average of nine minutes more daily using their mobile devices than their television sets this year.

eMarketer also projects mobile's margin will continue to grow through 2021, when Americans will be spending an average of 32 minutes more daily than they do with television.

Needless to say, it's not an apples-to-apples comparison, since people use their mobile devices for more functions than they use TV for, including various forms of communications, search, browsing, etc., but eMarketer also released a secondary analysis showing the amount of time Americans spend daily watching TV vs. "digital video," including video content accessed via personal computers, mobile and other "connected" devices.

Americans will spend 209 minutes daily watching TV this year, about 2.2 times the 97 minutes they spend watching digital video daily, according to eMarketer's estimates.

“While time spent watching traditional TV is declining, the networks already monetize their content that is viewed on OTT [over-the-top] services like Netflix or Hulu,” eMarketer Forecasting Analyst Eric Haggstrom, explains, adding, “Soon-to-be-released streaming services from Disney, WarnerMedia and NBCU may allow them to monetize their content more effectively. Whether or not these services gain traction and replace lost audiences remains to be seen.” 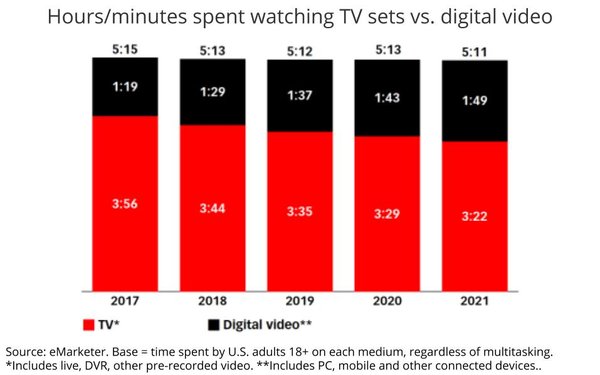