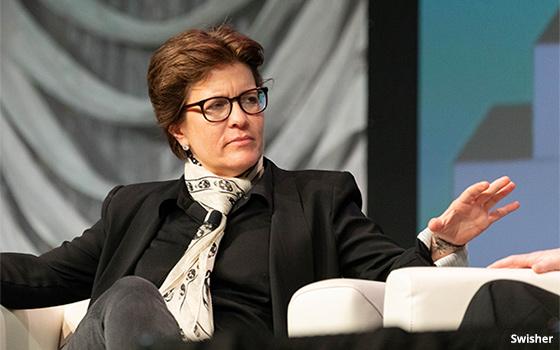 “The Russians did not hack Facebook. They are customers of Facebook. They are using the platform the way it was built,” Swisher said at the 2019 Forbes Women’s Summit held Tuesday. She is the cofounder-editor-at-large of tech publisher Recode.

Platforms encourage users to stay on the feed, share content and engage with each other, behaviors that can exacerbate the proliferation of misleading information.

The tech giants “should have understood the consequences of [their platforms] and planned for it, but it doesn't work economically,” Swisher added.

Swisher, who is known for calling out tech companies and advocating for the need to hold them accountable for their actions — such as selling users’ data for profit — was interviewed by Melissa Bell, publisher at Vox Media. Vox owns Recode.

When speaking about “the reckoning” of social media giants for such behavior, Swisher said the time came “to start recognizing these companies were nothing more than people trying to make money ... and the damage they have done is something we needed to look at strongly and regulate."

She dismissed regulators like the FTC and FCC as “dormant,” while state and local legislators “have been a little more awake, but only recently.”

California passed a data privacy law, called the California Consumer Privacy Act, last summer. It will go into effect next year, and restrict the way companies can collect and use data, similar to the GDPR across the pond.

About three-quarters of U.S. adults (77%) say steps should be taken to restrict altered videos and images that are intended to mislead. Just 22% favor protecting the freedom to publish and access them.

Speaking to a room full of women at the summit, Swisher noted tech companies have grown “extraordinarily powerful” with little regulation — and this has had an “impact on girls, and young people.”

Swisher believes the reason Twitter is a platform plagued by bullying “is because young, white men created it. They don’t understand bullying.”

A study last year from The University of Texas at Austin’s Center for Media Engagement, for example, found that female journalists are too often the target of online harassment.

“Women make up more than half of the use of the internet and are not represented in any way in the leadership of it,” Swisher said. “It’s basically just [Facebook COO] Sheryl Sandberg."

She encouraged the women in the room to take action.

“You have the power in usage of these things to advocate to legislators, to talk to these companies, to see what you want in them, to make them healthier for our children, and for our society. Not this twitchy, rage-filled culture that we have right now.”