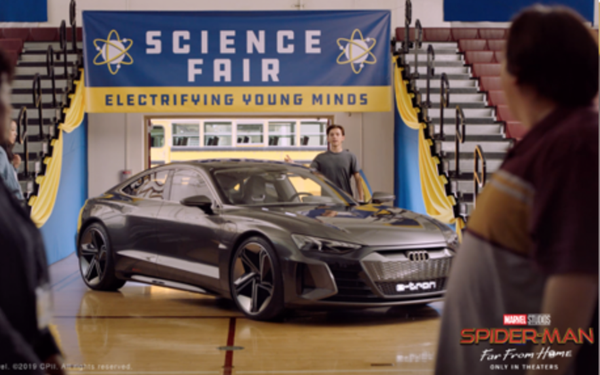 Audi of America is launching exclusive digital content today in advance of “Spider-Man: Far From Home,” set for a July 2 release date.

The content is a sneak peek into Peter Parker’s high school science fair before he takes off for his summer adventure. The digital short, “Science Fair,” features Peter Parker (Tom Holland) and his best friend Ned, (Jacob Batalon) up against some very serious competition. To save their presentation, Peter uses his connections to get his hands on the latest technology, the Audi e-tron GT concept car.

The Audi e-tron SUV, Q8 and A7 will also make appearances on the big screen as the superhero ride of choice in “Spider-Man: Far From Home.”

Teaming up with Sony Pictures to showcase the latest step in Audi’s evolution—electrification—gives the automaker a unique opportunity to better socialize this important technology with a highly engaged audience, says Loren Angelo, vice president of marketing, Audi of America.

“Audi was excited to expand into this new vision and story for Spider-Man when this character joined the Marvel cinematic universe,” Angelo tells Marketing Daily. “It’s been a great extension to add in the partnership with Sony as well as Marvel to this smart storyline that provided another opportunity to tell Audi technology stories.”

The video was created by Audi of America's current social AOR, M/H VCCP in coordination with Sony Pictures. Audi in the UK is currently conducting an agency review for its creative account and VCCP reportedly is one of the finalists. Incumbent Bartle Bogle Hegarty, who has held the account there for 37 years, is on the shortlist alongside Engine, M&C Saatchi and VCCP.

Audi is sponsoring the world premiere of the movie in Hollywood and Audi vehicles will also make an appearance at that event this summer.