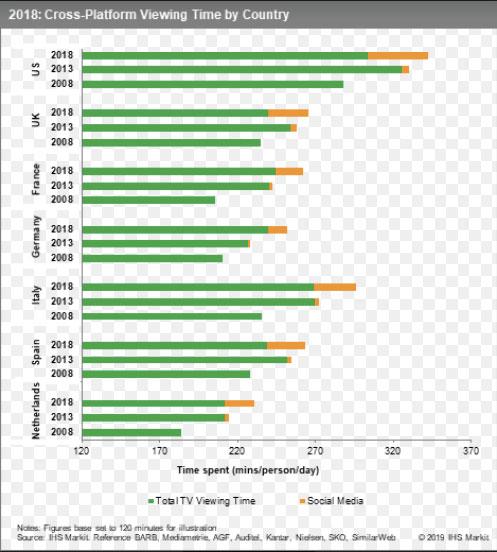 TV viewing trends are changing, reflecting a shift in consumer behavior, as well as demographic preferences.

Such a shift underscores a critical behavioral change in viewing habits, as more TV watchers from the U.S., UK, France, Germany, Italy, Spain and the Netherlands gravitate to non-linear TV.

Rob Moyser, research analyst at IHS Markit, said in previous years, non-linear TV viewing was largely additive … "however, non-linear now has become an alternative for linear TV for many consumers." That shift is most notable in younger demographics.

The most popular non-linear TV is online long-form video, usually 15 minutes or longer. That momentum is driven by various subscription services, such as Netflix.

Nonlinear TV ad sales are also getting a bounce. These sales, on Hulu, full-episode players and other digital areas, will increase by 22% to $2.6 billion in 2019, according to Magna, the intelligence unit of IPG Mediabrands.

Social video is witnessing upticks, too — more than eight minutes per person, per day. While it doesn’t substitute for linear TV, it does increase overall cross-platform viewing stats. Facebook drove most of the growth, given its video-centric adoption.

In fact, 28% of adults across the U.S., UK and Germany play video content from their mobile device on a TV at least once a month, per IHS’ November 2018 media report. That total rises to 46% for those 18-24.

That finding is echoed by Parks Associates, which found U.S. broadband houses likely to cut the cord in the next year watched more than six hours of video content on their phones, versus 2.5 hours among all broadband households.

“Mobile devices have become a key area of growth in terms of video consumption, particularly out of the home, as data plans become more affordable and screen sizes increase,” stated Fateha Begum, principal research analyst at IHS. She also noted the opportunity to reach wider audiences "as consumer appetite for short-form viewing improves.”

That may be good news for Quibi. Cofounded by Jeffrey Katzenberg and Meg Whitman, the short-form video series is set to debut in April 2020. “... until day one, every decision we make around content will be driven by instinct,” Katzenberg told Variety. “Minutes after we launch, everything will be driven by data.”