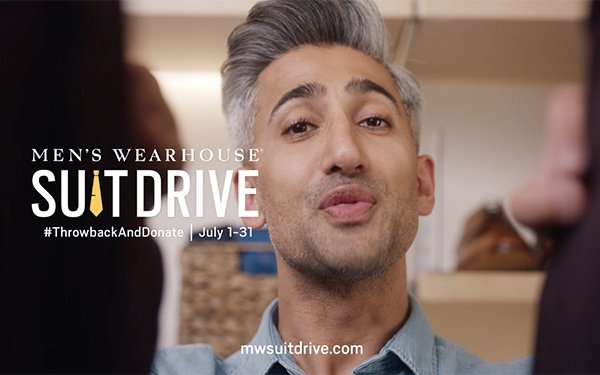 Men's Wearhouse launched its annual Suit Drive on July 1 by leveraging the fact that #tbt was the most used hashtag on Instagram in 2018, with more than 407 million posts.

The campaign, developed with EP+Co, invites people to post pictures of themselves in suits using the popular #tbt, then encouraging them to head offline to donate corporate attire to the retailer in exchange for 50% off their next purchase.

The discarded suits will be distributed to men and women entering (or re-entering) the workforce.

Although Men’s Wearhouse has always tapped a celebrity to drive awareness of this initiative from a PR perspective, this year the company is partnering with Tan France of "Queer Eye" and will integrate him more fully into the entire project.

France is featured in broadcast TV spots and across social media and is an active presence in press coverage. His elevated role serves as an evolution of an endorsement deal, begun last fall, with the retailer pivoting from its older image and spokesman founder George Zimmer.

"Tan is the personification of what the brand stands for — having the confidence to be a good guy and breed that confidence in those around you," says Emily Rule, vice president, planning director, EP+Co.

"Tan’s major fan base and following is very female, near 70%,” explains Rule. “So by tapping him as the face and the voice, we are hoping to activate the women out there to become a driving force behind increasing participation this year.”