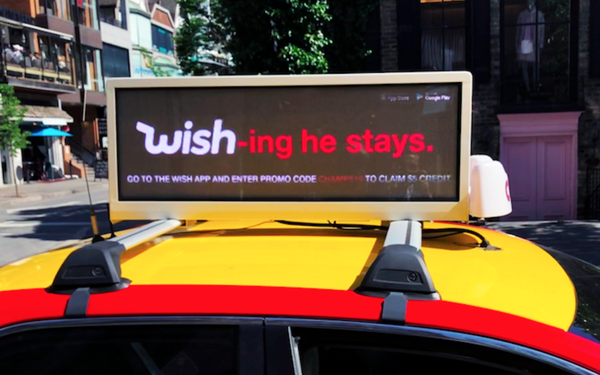 Ecommerce platform Wish has launched a campaign to keep the NBA’s hottest free agent north of the border.

Kawhi Leonard, the reigning NBA Finals MVP, has not made a decision on where he's going to play next year. He could still strike a deal with his current team, the Toronto Raptors. There's also speculation he might choose the Los Angeles Lakers, which could certainly use the help.

Wish is running a series of billboards, mobile digital ads and print placements in the Montreal, Toronto and Hamilton, Ontario markets, “Wish-ing” the NBA star remains with the Raptors. The ads, which are also featured in French, include a $5 promo for consumers, #champs19, citing the Toronto Raptors' recent NBA championship.  The effort was created in-house.

San Francisco-based Wish has close ties to Toronto. Founder Peter Szulczewski grew up in the area and the company’s second-biggest offices are located in the city.

Wish is also the Lakers jersey sponsor, so Snoop Dogg posted a video on Instagram expressing his wish that Leonard chooses to LA. The post has already generated more than 1.2 million views.