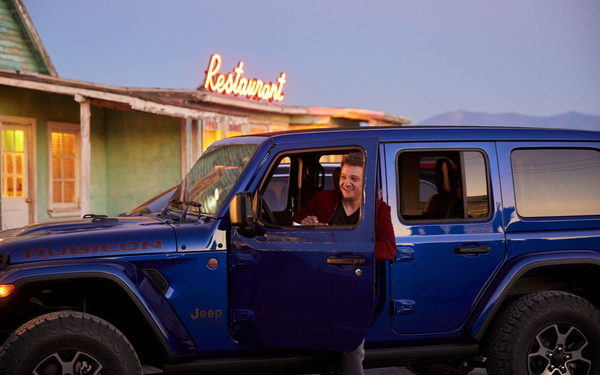 Fiat Chrysler Automobiles is using musicians in separate efforts for its Jeep and Ram brands.

Jeremy Renner is starring in a Jeep TV campaign that includes three of his new music tracks: “Main Attraction,” “Nomad” and “Sign.”

The actor, singer-songwriter and musician stars in a series of commercials for Jeep brand’s sixth annual “Summer of Jeep” campaign, breaking across television, digital and social channels today.

Another FCA brand, Ram, recently collaborated with country music star Eric Church for a new video, “Loyalty.” The spot, which is airing both digitally and via broadcast, made its television debut June 5 during the CMT awards. Ram worked with Nashville-based G7.

Both the Jeep and Ram efforts will run through September.

The Jeep campaign was created in partnership with the Chicago-based HighDive agency.

In "Party |Main Attraction,” featuring the Jeep Grand Cherokee, Renner breaks free from a stuffy Hollywood black-tie affair to pursue new possibilities. In "Diner | Nomad,” Renner is sitting in a diner writing music and then imagines himself on a road trip, inspiring the lyrics to a song.The spot features the Jeep Cherokee. "Ride Swap | Sign" features an interaction between Renner and his fans where he trades his tour bus for the open-air freedom of a Jeep Wrangler.

Renner is not just an on-screen action hero, but someone whose talents "go well beyond acting,"says Olivier Francois, CMO of FCA. His music, "which is authentic, honest, rock n' roll, aligns with the same spirit and philosophy of the Jeep brand."