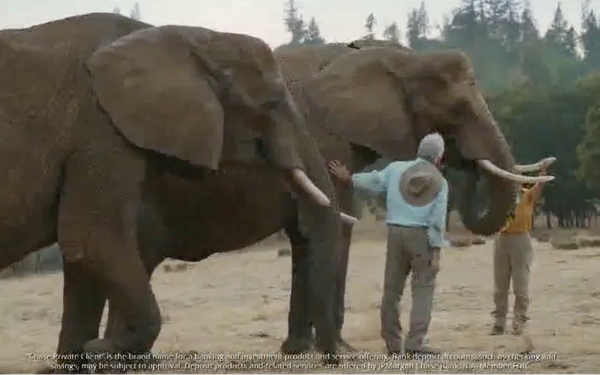 Following pressure from the People for the Ethical Treatment of Animals, JPMorgan Chase has opted to pull advertising featuring elephants and has committed not to use elephants or other wild animals in its advertising in the future.

The financial services company joins Bridgestone, Johnson & Johnson, Levi Strauss and Young & Rubicam in the commitment to avoid use of wild animals in ads.

"Elephants used in bathing and other encounters are beaten and frequently kept chained once the tourists leave, and they're controlled through the constant threat of punishment,” Reiman says. “PETA commends JPMorgan Chase for acting quickly and compassionately to remove these ads."

PETA informed JPMorgan Chase that elephants in camps that offer bathing encounters often endure the same abuse as those used for rides do, such as being forcibly separated from their mothers, immobilized with tightly bound ropes, and gouged with nail-studded sticks or other sharp objects.

All activities that involve direct contact with elephants contribute to the demand for the wild capture and captive breeding of these animals to be used at tourist attractions, according to the animal welfare group.

PETA launched an advertising effort of its own recently urging SeaWorld in Orlando and San Diego to end their captive animal shows and asking the public to boycott the attractions. The ads are on display at several malls near each of the locations.

The campaign was spurred by the deaths of more than 40 orcas throughout the history of SeaWorld's parks, and just weeks after PETA shared a new veterinary report asserting that bottlenose dolphins at all three SeaWorld locations have open wounds and extensive scarring, but trainers still ride on dolphins' backs and stand on their faces during performances.