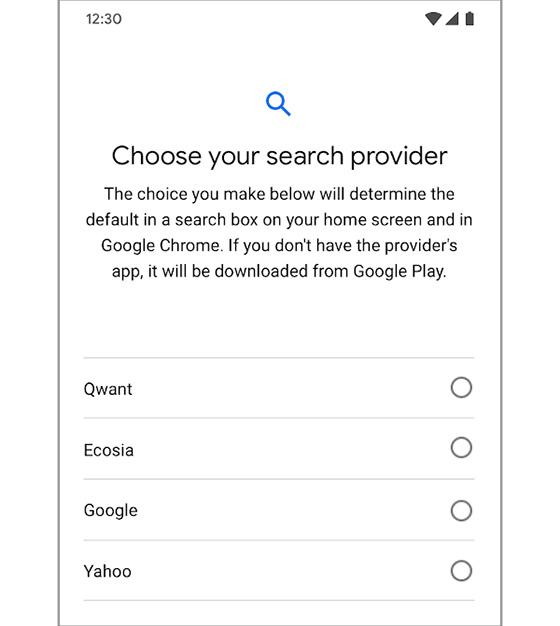 Google will begin giving Android users in Europe a choice to select a provider to power a search box on their home screen and as the default in Chrome when installed.

Search providers will need to apply to become part of the program that gives their users a choice in the search engine they use. The choices will appear on a screen when someone sets-up a new Android smartphone or tablet.

The process was announced in April 2019, based on a mandate to comply with the European Commission's ruling in 2018. The EU fined Google, saying it had an unfair advantage by pre-installing its Chrome browser and Google search app on Android smartphones and notebooks.

The changes will comply with the EU ruling and give users with a phone running the Android operating system and Chrome browser an option to customize and personalize their device.  It includes selecting the apps to download.

It also has the ability to change how apps are arranged on the screen, and switching the default search provider in apps like Google Chrome.

Google opened the application process for search providers on Friday. The new choice screen will be introduced to new Android phones in Europe in early 2020.

In Europe, Google said it will use “a first-price sealed-bid auction to select the other general search providers that appear in the choice screen.” The auction will run on a per-country basis from January 1, 2020 to December 31, 2020. Following the initial round of auctions, any subsequent rounds will occur once per year.

Search providers for each auction must state the price they are willing to pay each time a user selects them from the choice screen in the specific country.

Each country will have a minimum bid, with the three highest bidders that meet or exceed the bid appearing on the screen. The name of the auction winners, and Google, will appear randomly in the choice screen so as to not favor one over the other.