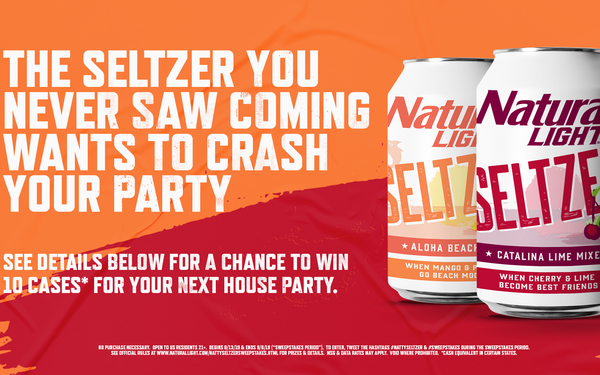 It used to be the Anheuser-Busch made news because of its beer brands. Now it’s all about seltzer.

A couple days ago, Anheuser-Busch InBev rolled out Natural Light Seltzer, an extension of  its Natural Light beer line -- which is already a staple with younger drinkers because it’s inexpensive and because the brand does a good job of catering to that crowd on social media, the company says.

According to new Nielsen data, hard seltzer sales grew 164.3% in July and 200% over the last year. White Claw, from the maker of Mike’s Hard Lemonade, has a 50% share of the market.

“The seltzer category is booming. It’s part of a larger shift in consumption across America and we believe it has tremendous staying power,” said Ricardo Marques, Anheuser-Busch vice president of core and value brands.

The seltzers’ tagline is, “This is the seltzer you never saw coming!” and it arrives just as college students head back to their party-hardy campuses.

In fact, in a promotional contest, the brand says it will deliver 10 cases of the stuff to each of 100 winners who do the best job of explaining why their party needs Natural Light Seltzer to reach its maximum fun potential.

The beer lists a 6% alcohol content, more than the 4.2% in Natural Light beer and one percent more than White Claw, which provides  5%.

Those are all modest compared to Pabst Blue Ribbon Stronger Seltzer, the bluntly named new entry from PBR, also announced Monday. Lime-flavored Stronger Seltzer boasts not only an 8% alcohol content, but is sweetened with Stevia, so it has just one gram of sugar.

The Natural Light Seltzer introduction comes just days after Anheuser-Busch acquired Cleveland-based Platform Beer Co., a fast-growing craft brewer that claims to have 600 recipes for beer and seltzer. The founders of Platform will stay on and the brand will operate separately from the larger Anheuser-Busch InBev corporation, the world’s largest brewer.