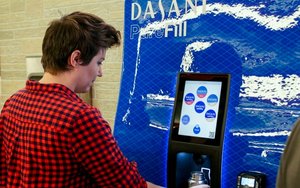 Even as companies like Coca-Cola continue to evolve their packaging and enter the self-serve water machine business, the U.S. recycling industry remains in a state of chaos, according to a study by the Grocery Manufacturers Association.

The GMA report, titled “Reduce, Reuse, Confuse” is subtitled “How Best Intentions Have Led to Confusion, Contamination and a Broken Recycling System in America.” Based in part on consumer surveys conducted in March of 2019, it paints a rather bleak picture of a nation seemingly obsessed with all things sustainable yet mired in its own mess that grows bigger each day.

The GMA cites Environmental Protection Agency data showing that America recycles only 34% of its waste, up only five percentage points from the rate (29%) in 2000. “America’s recycling systems are increasingly complicated,” the report notes. “The network of symbols on products do more to confound than explain.”

For example, there are seven plastic resin codes representing different types of plastic. In most cases, codes one and two are consistently accepted from curbside recycling programs. “But a total of 92% of Americans did not understand the labels,” says the GMA report. “Upon learning that only two of the seven codes were typically recyclable curbside, 73% were surprised.”

On the positive side, CPG providers have not been idle, as the GMA explains. Kellogg has reduced the weight of cereal box liners by 17%, eliminating 192,000 pounds of packaging material. Clorox Company’s Glad brand reduced the amount of plastic in its trash bags by 6.5%, the equivalent of 140 million fewer bags per year, while Ferrero redesigned its Nutella brand food service pack and saved more than 26 tons of excess packaging material. In 2017, PepsiCo began packaging its Tostitos brand in plant-based, compostable bags for food service accounts in the United States.

Coca-Cola will start selling Dasani water in aluminum cans in the Northeast next month, as it and many other companies continue to seek ways to reduce plastic waste — and avoid consumer criticism.

In some ways, CPG beverage companies find themselves in their own cross-hairs by competing against bottled beverages with devices like Coca-Cola’s Dasani PureFill station. The machine debuted a year ago at the Georgia Institute of Technology campus, offering free water in the container of one’s choice and bubbles and/or flavoring for a small fee.

Given the potential for self-cannibalization, it’s understandable that Coca-Cola is rather late to this particular game.

A competitor to Coke's self-serve water stations, Voda, was started about five years ago by Matthew Cremins while studying at the ecology-minded University of Connecticut. His team created the Smartwell machine, which offered water refills plus flavors. In 2018 Voda was acquired by Elkay Manufacturing -- and Smartwell has quickly gone from college campuses to offices, with distribution in about two dozen states.

“One of our pitching points that has really resonated with businesses is the ability to go green and reduce their footprint,” Cremins says. “It’s also a convenience thing. A lot of offices are going to Costco and buying all this stuff,, lugging [multiple bottles of water] back and throwing [them] away.”