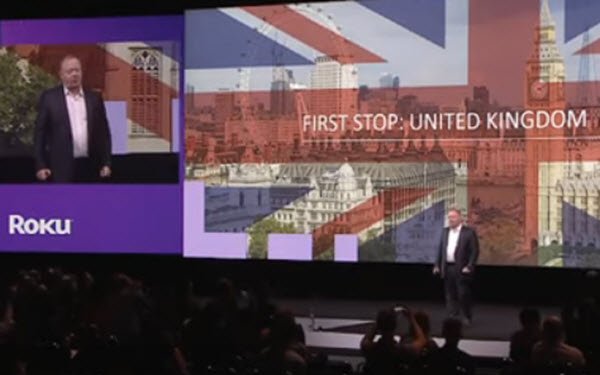 Continuing its push to be the dominant connected TV standard, Roku announced that it is expanding its TV licensing program to Europe.

Hisense will become Roku’s first European OEM partner, starting in the fourth quarter with TV sets up to 65 inches in size.

The news was announced during last week’s IFA trade show in Berlin.

Roku CEO Anthony Wood (shown above and in IFA keynote video embedded below) also argued that the Roku TV program, which includes hardware design, software and support, is the natural software solution for connected TVs.

In fact, he declared, "We aspire to power every TV in the world."

“TV manufacturers that embrace a licensed operating system are going to be leaders,” Wood said. “The rate of innovation in the software on televisions is just enormous right now. It's just a very rapid pace of innovation that's very hard for a single company to keep up with.”

Roku is now the largest connected-TV operating system in the United States, accounting for one in three CTVs sold.

However, this is the first move beyond the U.S. for Roku, which had an estimated 4% of the worldwide CTV market as of March, per a Strategy Analytics analysis, Fierce Video noted.

In addition to Google’s Android TV, Roku is competing with Amazon’s Fire TV models, which itself announced at IFA that it is expanding availability of its devices in Europe.