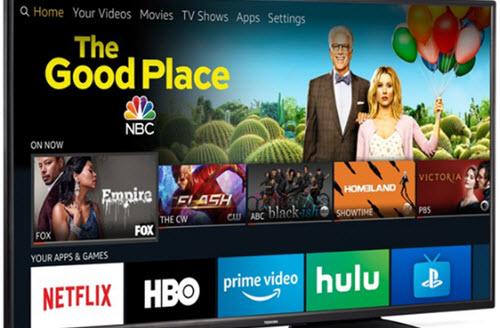 Fire TV now has more than 37 million active users globally, Amazon said during a presentation at IFA in Berlin.

In comparison, rival Roku has a smaller global base (30.5 million actives), but it continues to have more U.S. users, and has a dominant 15.2% of all streaming devices in the U.S.

Amazon also announced a slew of new devices, including a Fire TV edition of a Nebula soundbar, and a new Fire TV Cube.

Staying ahead of Roku’s international expansion, Amazon is also expanding availability of its devices in Europe — including introducing 15 new Fire TV-edition smart TVs with manufacturing partners, beginning in the U.K., Germany and Austria.

In the U.S., Amazon will debut its new 65” Toshiba Fire TV Edition smart TV with Dolby Vision this fall.

Reflecting the user data and engagement advantages of owning a TV operating system, Amazon last fall began requiring ad-supported services on Fire TV to give it 30% of their ad inventory — the same percentage required by Roku, according to The Motley Fool.

Amazon's ad sales “continue to grow at a strong pace, after skyrocketing over the previous two years,” says the report. “Other revenue, of which advertising is the main contributor, was up 37% year over year in the second quarter, surpassing $3 billion. While advertising on Fire TV still represents a small sliver of that amount -- Roku, for example, generated about $125 million in ad sales last quarter -- it has massive potential for growth.”