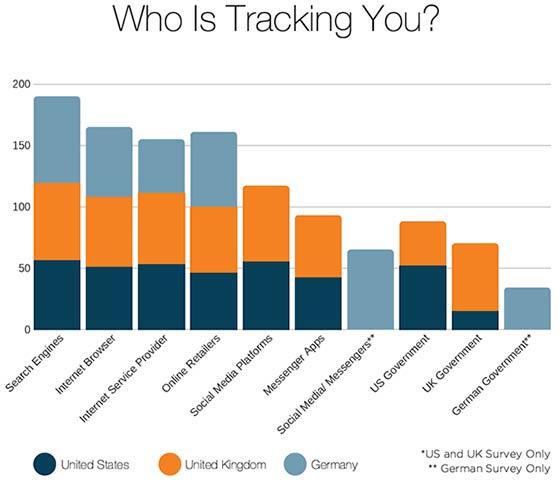 Germans are the most paranoid consumers when it comes to privacy. Americans are less so, and the British are even less concerned, according to a new study by BullGuard.

But all three nationalities use public Wi-Fi, despite fears that it isn’t safe. And they don’t install protections that could prevent financial disaster.

Specifically, 62% of Germans are concerned about their privacy, as are 53% of Americans and 48% of British consumers.

Germans have a more heightened awareness of GDPR than Americans. But the British are also subjected to almost daily reports on the subject.

Drilling down, 71% of Germans polled believe search engines such as Google are tracking their online activities, compared with 63% of the British and 56% of Americans.

Germans are also more likely to believe online retailers like Amazon are tracking them — at 61% compared with 54% of the British and 46% of Americans. And they are more prone to have this suspicion about internet browsers.

However, Germans are less likely to fear their internet service providers — only 44% say their ISPs are tracking them, falling behind the British (58%) and Americans (53%).

English speakers are more concerned about government tracking — 55% of Brits suspect their government is doing this, along with 52% of Americans and only 34% of Germans. (The German stat was collected in a separate question). To some extent, British and American consumers also fear the other nationality’s government.

The study is not clear on whether consumers connect mere data collection with evil intent. But it does show that 69% of Germans use antivirus protection, more than the British (62%) and Americans (48%).

Despite their fears, consumers are taking risks by using public Wi-Fi without protections.

Perhaps more alarming, 19% of Americans, 17% of the British and 14% of Germans have use a credit card when connected to public Wi-Fi. Yet 65% fear having their financial information hacked.

That disconnect between fear and behavior appears to be the main point of this survey. After all, BullGuard is a security firm that offers VPN and various other protections.

“Consumers are playing Russian Roulette with their personal data and privacy, opting for convenience over safety when using public Wi-Fi,” states Paul Lipman, CEO of BullGuard.

Lipman contends that these consumers are “risking financial theft, identity theft, account fraud and more in their quest to use public Wi-Fi.”