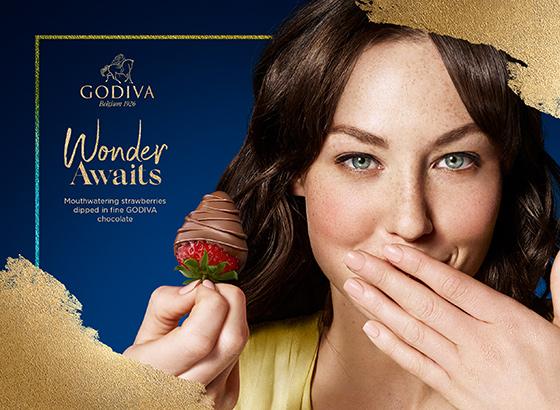 Godiva is bolstering its ad budget to reintroduce the chocolate brand with its new "Wonder Awaits" campaign.

The creative, developed with McCann London, seeks to age down its consumer base, as well as encourage usage beyond the holidays or special occasions.

The images are based on the brand's origin as a love story between Godiva founder Pierre Draps, who originally made the treats for his wife. Using this inspiration, "Wonder Awaits" introduces Pierre and Mimi (though her real name was actually Eugenie) as they enjoy these chocolates and playfully interact with one another.

"Godiva is growing exponentially, and we are dedicated to creating wonder and delight for our consumers at every touchpoint along the way — whether it be in our boutiques, cafés, at grocery and retail stores, or online," explains Annie Young-Scrivner, CEO, Godiva Chocolatier.

Two years ago, Godiva made another large-sized attempt to shift purchases beyond special occasions with the "Chocolate Never Felt So Good"  global campaign from London-based Chi & Partners. The sensual, suggestive imagery targeted a wide audience and “demonstrated the multisensorial effect of eating Godiva chocolate,” while maintaining the brand’s reputation for quality, according to the agency.