Truman's Aims to Shake Up The Way We Clean 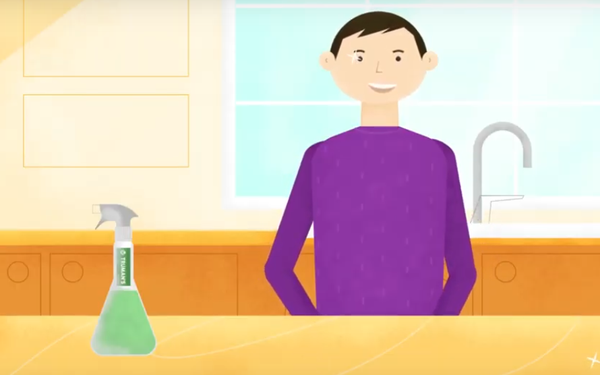 Americans love to squirt stuff, and Truman’s wants to change the way we do it. Many of us have dozens of different cleaning supplies under the sink. The active ingredients are often toxic, and they add to the world’s plastic problems. And about 98% of all those products are plain old water.

“The supply chain supporting that is impractical, and we believe once people realize that, they’ll open to a new way of thinking,” says Alex Reed, CMO and co-founder of Truman’s.

The company launched six months ago and recently got a $5 million round of seed funding from Henkel, the German chemicals conglomerate. (Both Reed and Jon Bostock, CEO and co-founder, had previously been at BigAss Fans, and left after it was sold last year.)

“We wanted to do something D2C, and as we studied the landscape, we felt cleaning was one area that was overdue for disruption,” Reed says.

The idea came from looking more closely at several trends. Especially on an industrial level, there were already companies selling concentrates. “But employees are often uncomfortable about touching chemicals,” he tells D2C FYI.

There are plenty of brands — including Method, Mrs. Meyer’s and eCover, as well as retailers like Brandless — selling cleaners that are more-natural and sustainable. Reed concedes that there are also plenty of people out there who already regard themselves as cleaning mixologists, scrubbing away with homemade potions of their own.

But Reed and Bostock saw an opportunity to put those trends together, along with the ease of a subscription model. They announced the concept about a year ago, adding the goofy names that have become a branding requirement for D2C aficionados: Everything and the Kitchen Sink, Floors Truly, The Glass Is Always Cleaner and More Shower to You.

To prove its millennial street cred, the animated video even takes a mild jab at a little old lady holding up retail checkout in the example of the “miserable life” without Truman’s.

The initial response was strong. “We had about 10,000 people on our splash page, so by the time we launched, we already had tremendous tailwinds,” he says.

Reed won’t comment on current sales, other than to say they are growing about 30% month-over-month.

He says the real opportunity “isn’t to find the few people  already using concentrates and telling them we had a better mousetrap, but the ones who are using retail products.”

Truman’s appeal comes from educating people on the dirty secrets of the cleaning-supply business. Truman’s products aren’t just better for the environment because of the gentler chemicals they use. They also reduce the amount of plastic used, since the squirt bottles are reusable.

Still, that’s not the focus. “We don’t want to be a green brand,” he says. “We want to have a sustainability impact.”

And simplicity is a major selling point, he says. “There may be hundreds of different cleaning solutions, but most people feel like the category is overcomplicated.”

It’s always fun to ask founders what’s surprised them most. For Reed, it’s been the importance of customer service. “We thought it would be minimal,” he says. “But it turns out people want to talk about the products a lot — they have hundreds of questions, and we pride ourselves on answering them fast, often in five minutes or less.”

That, he thinks, is the reality of the D2C world. “We are directly interacting with our customers all the time, in a way that’s just not true for a company like Amazon or Brandless.”