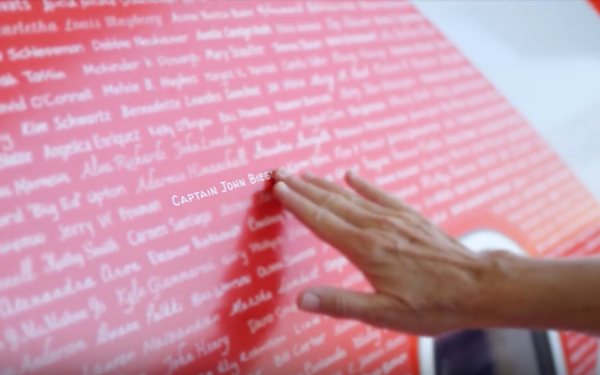 American Airlines teamed up with Hyatt and the Universal Orlando resort to give families affected by cancer a weekend to remember.

As part of its “Stand Up To Cancer” effort, the airline also debuted the American Airlines Airbus 321 that features 22,627 names of cancer survivors, patients and those who have died from the disease.

Names were submitted by the public throughout the month of July. Each donated $25 or more to have their loved one’s name added to the plane, resulting in more than $825,000 for cancer research. Donors who participated in this year’s campaign can visit a microsite to see the location of their submitted names on the plane.

To mark the inaugural flight of the freshly painted aircraft on Sept. 20, American flew a group of cancer survivors and caregivers from Los Angeles to Orlando. During the flight, Big Machine recording artist Noah Schnacky and comedian Marina Franklin entertained.

The volunteer flight crew for the inaugural flight all have a connection to cancer. One of the pilots was American Airlines First Officer Brandon Bailey, who appeared in the Stand Up To Cancer PSA alongside Tim McGraw. Bailey represents his mother, Machelle, who faced cancer while Brandon was deployed to Afghanistan.

In Orlando, Hyatt provided participants with guest rooms and hotel experiences at Hyatt Regency Orlando. Universal Orlando Resort hosted guests to a day at the park and VIP treatment.

This is the latest phase of American’s multiyear campaign with the charity Stand Up To Cancer. The collaboration has raised more than $8 million to help fund collaborative cancer research.