What Does Search Data Say About The Streaming Wars?

Search behavior can by no means be assumed to link directly to how likely consumers actually are to shell out money for subscriptions to SVOD streaming services, of course — not to mention the fact that by its nature, search is highly influenced by events of the moment and social media trending.

Still, some new search data from the ad-tech/search intelligence firm Captify is intriguing — and may even offer some hints about what consumers most want to know or care most about at this point in time, about upcoming and existing SVODs.

Captify captured and analyzed 41 billion searches around “streaming services” on premium publishers between August 12 and September 11.

One finding: Apple TV+ — which recently made headlines by announcing that it will under-price competitors when it debuts on November 1 ($4.99 or free for a year with the purchase of an Apple device) — was the only streaming service that had a higher volume of searches around price than content. (See table above.)

“Competitors Netflix, Amazon and Disney have all established themselves as serious content creators with a huge back catalog of content,” notes Captify. “With slim content offerings in comparison, Apple is trying to attract subscribers with a bargain price [and free-with-device offer]. And it’s evident that consumers are indeed searching for price as a first line inquiry into the Apple+ service.”

That said, Apple TV+ accounted for just 1% of the streaming-related volume captured.

And that brings us to another finding. During the period analyzed, Disney+ —  set to launch November 12 for $6.99 or $12.99 bundled with Hulu and ESPN+ — had more than triple the search volume of leading streamer Netflix, and completely blew away Amazon Prime, as well as Apple TV+: 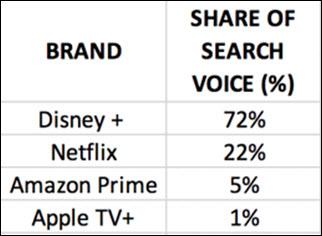 Does that signal trouble for Netflix? Maybe. But indicator-wise, Netflix would seem to have considerably bigger things to worry about, including that Pivotal Research Group has just significantly reduced its Netflix target price for year-end 2020.

Meanwhile, Amazon — which paid $130 million to get two more years’ streaming rights to NFL Thursday night games and $40 million to stream the U.S. Open in the U.K. for five years — does seems to be realizing a search advantage as a result.

According to Captify, sports fans are 47.9 times more likely to be searching for Amazon than for other streamers.

While it’s important to note that the U.S. Open took place during the period analyzed (and viewers' dissatisfaction with Amazon's streaming coverage fed social media buzz), that still seems to be a big edge within the sports segment.

However, if search patterns are any indicator, the well-established leading services are pretty well-entrenched — or at least pretty top-of-mind — among millennials.