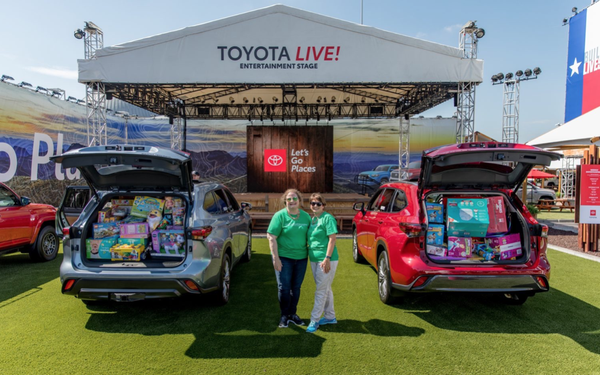 Nissan North America debuted the 2020 Titan full-size pickup at the State Fair of Texas, while Toyota Motor North America used the event to debut the 2020 Highlander, Highlander Hybrid and the 4Runner Venture,

Following a theme of “Powerful Warrior,” designers made changes to the vehicle including a new front-end design highlighted by an aggressive new grille and light configuration. The interior was redesigned to be family-oriented and features a high-resolution integrated command center with 9-inch touchscreen with internal WiFi router. It goes on sale in early 2020.

The automaker ultimately donated more than 200 items to a local Dallas County nonprofit, Community Partners of Dallas, to help children placed in the care of Child Protective Services.

Giving back to the community is a part of Toyota’s DNA, and is one of the reasons the automaker created Toyota4Good, the giving and volunteering engagement program, according to the company.

Toyota intends the Highlander to be a “symbol of the evolution of what family means to so many of our customers,” said Kathi Jenkins, vehicle marketing and communications manager, Toyota Motor North America, in a statement.

Chevrolet also used the State Fair of Texas to reveal two special editions of its 2020 Silverado 1500, the Midnight and Rally. The special editions will be available for order next month and will arrive at dealerships later this year.