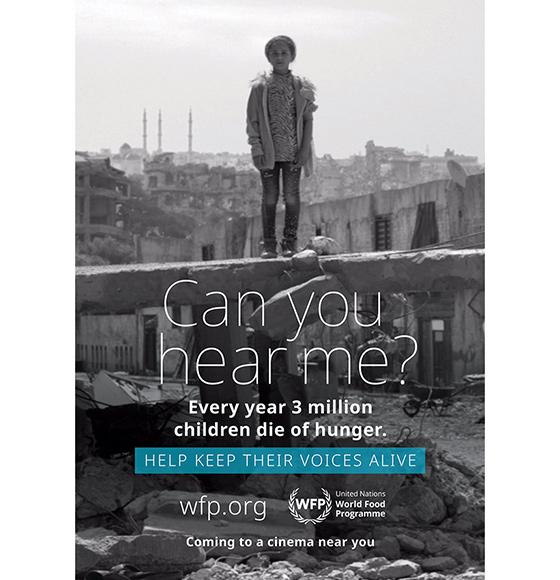 National CineMedia and Screenvision are again joining the campaign's second phase, part of a partnership between SAWA, the Global Cinema Advertising Association, and WFP, a humanitarian agency fighting hunger worldwide.

The new creative aims to build on last year’s results, which helped to double awareness of WFP among those who saw the ad and raised more than half a million dollars through online giving or through a 38% increase in downloads of the agency’s Share the Meal donation app globally.

Sir John Hegarty, of The Garage Soho, developed the ad to appeal directly to cinema audiences.

The spot — designed to tug at heartstrings — shows a group of Syrian refugee children singing “How Can I Tell You” by Yusuf Islam/Cat Stevens amid the rubble of a war zone. As the one-minute film progresses, children disappear until only one voice remains to underscore the reality that 3 million children worldwide lose their lives to hunger or malnutrition each year.

Theater support was critical to spreading this campaign's messaging due to its storytelling ability, stated Sir John Hegarty. "Cinema is still the most amazing medium for any creative person to work in -- a place for you to tell your story on the mother of all screens."

The ad airs in NCM’s Noovie show on movie screens across the U.S. through November.