Americans Feel Social Media Has Too Much Control Over News, Especially Republicans

At a time when federal regulators and legislators are contemplating the role that social media plays in the distribution of news -- legit, fake or somewhere in between -- a significant majority of Americans believe they have too much power over it.

That's the finding of a new survey from the Pew Research Center indicating that nearly two-thirds of American adults have too much control and that the result is that most Americans are getting a "worse mix of news" than they otherwise would through conventional means of news media distribution.

The study also finds a marked political skew -- with three-quarters of Republicans, but only about half of Democrats, believing that social media has too much control over the news that Americans consume.

Despite these concerns, Americans say they are getting more of their news from social media than they did over the past few years. 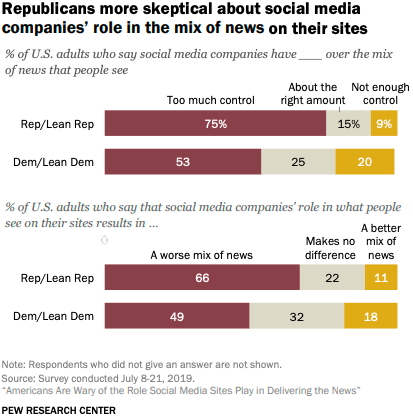