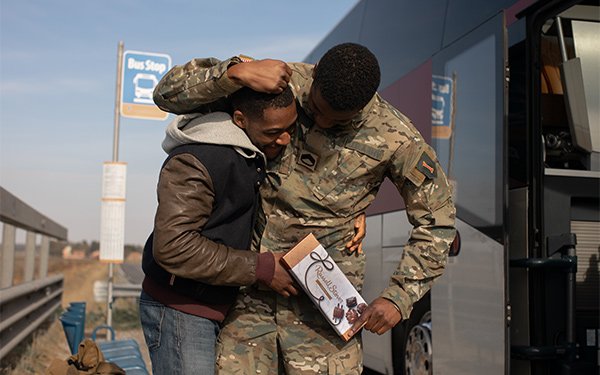 Russell Stover Chocolates is launching its first national creative campaign in 20 years by rebranding the chocolatier into a gifting company perfect for any occasion.

The overhaul, developed with Cutwater, centers around the new tagline "Make Happy" to celebrate the pleasure that comes with bestowing the gift of chocolates. The campaign also leverages the brand's signature copper bow found on its packaging to now symbolize chocolate’s unique gift of bringing people together.

“We all know and love the Russell Stover brand, so it was important to us to refresh it for today’s consumer base but also stay true to its core purpose,” said Chuck McBride, founder-Chief Creative Officer, Cutwater. “We came up with this idea of showcasing the journey of the gifter. The gifter is the person who is making happy,  who is making life sweeter with those little acts of generosity.”

The campaign's centerpiece is the "Hugs" TV, spot which follows a series of snippets of people bestowing the chocolate as gifts, including a little girl presenting a package to a boy at the playground. This creative will air in multiple broadcast iterations along with social-media support.

Another key asset to the rebrand is music. A collaboration with emerging artist Victory Boyd is introducing an original song, "I Wanna Make You Happy." She stars in a behind-the-scenes video that digs into her song-writing process.

"Russell Stover loved the idea of getting a unique song that connected with the campaign, but also giving an up-and-coming artist a platform to be heard by a broader audience," says Greer Gonerka, group account director at Cutwater. She explains Russell Stover originally briefed Boyd on the overall campaign and business strategy. Then Boyd "wrote a song she felt laddered up to those ideas."

The two sides agreed to release her tune as a single, in conjunction with the campaign's launch. Although there are no formal plans for Boyd to make any personal appearances or performances on behalf of Russell Stover, there may be potential in future, adds Gonerka.

Both the music partnership and creative messaging represent a new direction for the legacy brand, which previously utilized what Gonerka calls a "push marketing strategy." This outreach focused on in-store promotions, such as freestanding inserts and couponing, as well as introducing season-specific products and packaging, says Gonerka.