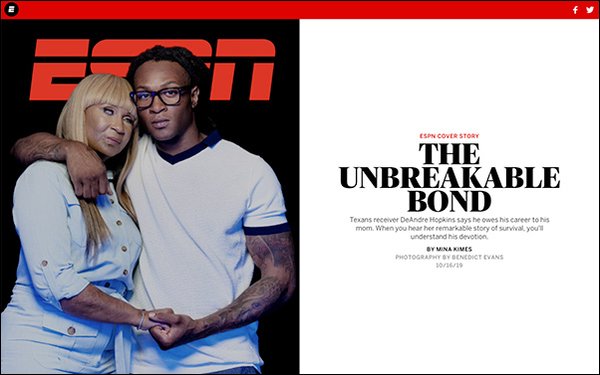 ESPN no longer has a magazine, but that’s not stopping it from releasing monthly cover stories.

Launching as a “multiplatform franchise” called “ESPN Cover Story,” a monthly feature will debut every month across ESPN’s channels, including television, social and digital.

It will include a long-form feature story, video and photography, with a main cover photo in the same vein as a magazine cover.

“Our goal with ESPN Cover Story is to capture what was most impactful and enduring about ESPN The Magazine’s legacy — and build on it,” stated Alison Overholt, ESPN vice president of storytelling and special projects.

Overholt is the former editor-in-chief of ESPN The Magazine.

The new cover-story franchise "touches nearly every dimension of the company, and we’re really proud to create something that allows ESPN’s multiplatform storytelling to shine," Overholt added.

The first ESPN cover story is on Houston Texans receiver DeAndre Hopkins and his mother, Sabrina Greenlee, who was blinded in an acid attack in 2002.