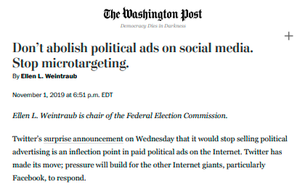 Web platforms should allow political ads, but combat misinformation in them by prohibiting campaigns from using “microtargeting” techniques, which involve serving ads to people based on the combination of demographics, online behavior, voter registration record and other offline behavior.

That's according to Ellein Weintraub, chair of the Federal Election Commission Chair. She argues in a Washington Postop-ed that microtargeting enables campaigns to spread lies to specific audiences, while avoiding the scrutiny that would come from a broader audience.

“The microtargeting of political ads may be undermining the united character of our United States,” she argues.

"It is easy to single out susceptible groups and direct political misinformation to them with little accountability, because the public at large never sees the ad," she writes.

She adds: “Microtargeting by foreign and domestic actors in 2016 proved to be a potent weapon for spreading disinformation and sowing discord.”

Her op-ed comes amid an ongoing controversy over political ads online. Several weeks ago, Facebook came under fire for allowing President Donald Trump to run an attack ad implying that former Vice President Joe Biden pressured the Ukraine government to fire its chief prosecutor for personal reasons. The ad falsely suggests that Biden wanted the prosecutor fired because he was investigating an energy company with ties to Biden's son. The Obama administration actually wanted the prosecutor fired for failing to investigate corruption among Ukraine's politicians, according to press reports.

Facebook CEO Mark Zuckerberg said the company considered prohibiting political ads, but decided that doing so could give incumbents an advantage.

Zuckerberg's stance reportedly has sparked pushback among employees, with around 250 workers recently urging the company to take steps to curb the spread of lies in ads. Among other measures, the employees say the company should prohibit political campaigns from using microtargeting techniques.

Twitter recently announced it would ban all ads by political campaigns, as well as issue ads, starting next month.

“It would be unwise, unnecessary and counterproductive for political speech to be shut out of the Internet advertising market altogether,” she writes. “I favor more political speech, not less. The far less drastic step of forswearing the microtargeting of political ads would in essence turn back the clock about a dozen years.”

She specifically proposes that campaigns should only be allowed to target geographically.

“Want to influence the governor’s race in Kansas? Your Internet ads could run across Kansas, or target individual counties, but that’s it,” she writes. “Running at-large for the Houston City Council? You could target the whole city or individual council districts. Presidential ads could likely be safely targeted down two levels, to the state and then to the county or congressional district level.”