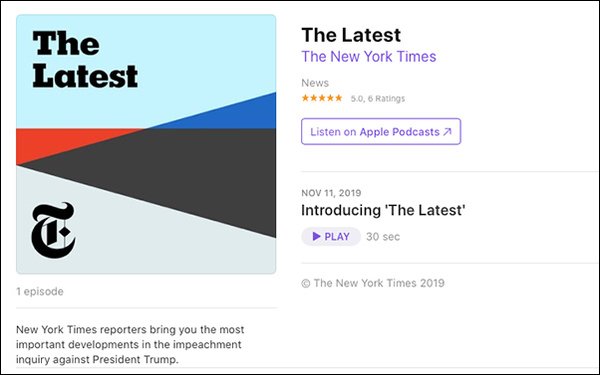 popular podcast show “The Daily” is coming out with a new audio series around the House impeachment inquiry against President Trump.

Called “The Latest,” the podcast will be led by Times congressional editor Julie Hirschfeld Davis, along with analysis from the newspaper’s congressional reporters, politics reporters and White House correspondents.

The impeachment inquiry into President Trump’s communications with Ukrainian officials has sparked a wave of newsletters, podcasts, verticals and mobile alerts dedicated to covering the impeachment process, from publishers like The Washington Post, Vox Media, CNN and NPR.

The New York Times recently launched an impeachment briefing newsletter that contains links to reporting from the NYT, as well as other news outlets.

New episodes of “The Latest” will be released in the evenings, after the day’s public hearings.

The NYT audio team has also produced podcasts like “Caliphate,” which focused on Rukmini Callimachi’s reporting on ISIS and, most recently, the “1619” audio series, about the 400th anniversary of the beginning of American slavery.

In September, “The Daily" hit the milestone of 1 billion downloads.

Separately, a day afterQuartz announced it had nearly 11,000 paying members since launching the program a year ago, the business site launched its first Japanese-language offering: a subscription email newsletter on the global economy.

Quartz Japan will produce two emails every weekday, including a Japanese translation of the "Quartz Daily Brief" and an afternoon newsletter focused on one topic each day.

Quartz has a UK edition. Next, it will release an edition for readers in India.

Nearly half of Quartz’s audience lives outside the U.S., according to the publisher.