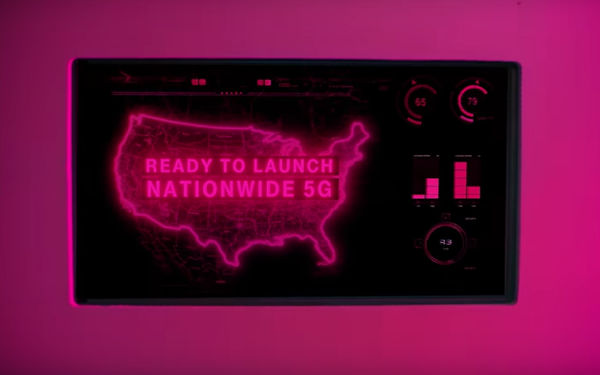 T-Mobile gets the bragging rights and the responsibility to add lots of asterisks to the claim.

T-Mobile is now claiming that “America’s First 5G Network Is Here."  In fact , T-Mobile’s coverage extends to 200 million people, which is, according to a U.S. Census estimate,  technically, approximately 127.2 million people short.

Still, T-Mobile brags that its 5G reaches 5,000 American “towns,” and covers more than 1 million square miles of the country, which amounts to 60% of the population. It emphasizes a strong presence in rural parts of the nation and has a coverage map that aims to prove it  The other carriers are nowhere as 5G-connected.

And while T-Mobile is now taking orders, technically it doesn’t really turn on 5G to its customers until Friday. That hasn’t stopped the wireless provider from prepping a new commercial in which lab-coat clad techies flip switches on a Flash Gordon-inspired control room.

The first “call” is from John Legere, T-Mobile’s publicity hound CEO, in what should be one of his last performances. He steps down from his role next April, replaced by the company’s president, Mike Sievert.

T-Mobile is using 600 MHg spectrum, which has the virtue of traveling longer distances than the “mmWave” 5G service that Verizon and AT&T will be rolling out, which is far faster but gets easily blocked by physical barriers.

But 600 MHg is not as fast. T-Mobile claims it will be able to do more and better once states fighting the T-Mobile/Sprint merger are satisfied and let the deal go through.

Verizon and AT&T continue to debut by adding new cities.  AT&T recently announced it will offer new 5G service in  San Diego, Indianapolis, Pittsburgh, Providence, Rochester, and San Diego, with New York, Boston and San Francisco next on a list of 10 additional cities. (That AT&T rollout is also not of the fastest type of 5G, but AT&T offers what it calls 5G+ in parts of 21 cites.)

There’s time. Most believe the consumer 5G revolution, if there is one, will be coming comparatively slowly, in large part because the smartphones that can supply it are still very expensive.  The initial two being offered by T-Mobile run between $899.99 (for the OnePlus 7T Pro 5G McLaren) to $1,299.99 (for the Samsung Galaxy Note10 5G). T-Mobile says it will offer 15 more affordable 5G phones in 2020.