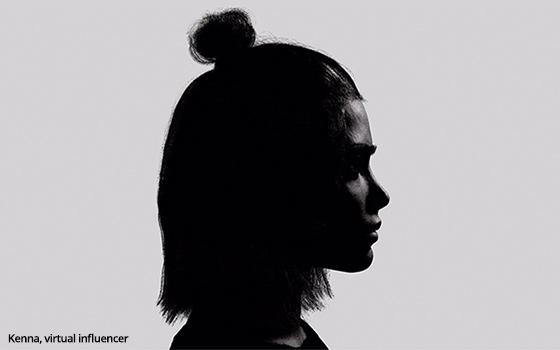 Cosmetic company essence is introducing Kenna, a CGI-generated influencer with her own Instagram channel.

Kenna, developed with digital agency Kubb&co, is designed to give fans insight into working at essence, from product development to what goes on at company events and parties. Her content will also revolve around stories and topics that targeted groups are interested in and can identify with, including fears for the future, self-doubt and concern for the planet. Other subjects include dating, living on a smaller budget and furnishing a first home.

"As an active part of our target group, Kenna can transport Essence's brand messages in the Gen Z's tone of voice and act as a friend," says Kristin Jaskolka, director of Brandhouse at essence.

On the surface, Kenna appears to be a regular girl. There are few signs she is not a real person. She has photographed her shoes, a graffiti wall and is captured sitting among various essence products. In total, she has five posts and 121 followers at the last check of her Instagram page.

"In our first discussions in July, it became clear that, even if it is developed artificially, our avatar is supposed to represent real life," says Chris Kubbernus, CEO of Kubb&co. "That's why we've created a young woman who's not perfect, but stands for realness and confidence and sets trends.”

The big challenge was to make the avatar look as "human" as possible, he adds. To achieve this, photo shoots were carried out with a real model and then the virtual person's head was digitally placed on the body.

Indeed, there is "a lot" of thought and time put into this both from the agency and on essence's side, explains Kubbernus. He adds each post is "well planned out and developed."

It remains to be seen if Kenna will catch attention among Instagram users.

The company sought to build a closer relationship with fans and noticed virtual influencers — computer-generated digital avatars — are becoming increasingly popular on Instagram. They have almost three times more engagement than real influencers, according to a recent study. Most of these characters are controlled by agencies and production houses.

“While other brands, including KFC have launched their own virtual influencers, this marks the first time a cosmetics company has showcased one," says Kubbernus.