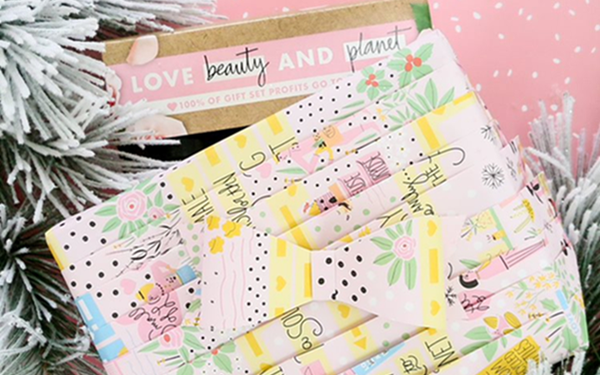 To cut down on the paper waste that comes with holiday gift-giving, Unilever’s Love Beauty and Planet is running a New York Times ad that works as gift wrap.

Sonika Malhotra, brand founder and marketing director, says the ad is meant to call attention to the beauty line’s positioning: making you feel beautiful while doing good for the planet. “The holidays are a beautiful moment, and we want to keep celebrating with family and friends, while just adding in a little bit more consciousness towards waste,” she tells Marketing Daily via email.

Malhotra says trash increases as much as 25% during the holidays, and that much of the paper waste associated with gift wrap isn’t recyclable. “We wanted to use our voice to raise awareness about wastefulness…in a way that feels more productive and happy.”

The ad is slated to run as a New York Times center spread, with a supporting digital campaign to drive awareness.

Love Beauty and Planet, launched in 2017, is aimed at women who are both beauty-conscious and socially aware, mostly millennials and Gen Z.

Malhotra concedes that not many of this target group may get the New York Times in its paper format. “But we’re hoping to create additional awareness for this platform through our social channels, influencers and general talkability of the ad.”

Influencers are scheduled to host “wrap parties” on their social platforms, offering digital tips on recyclable wrapping materials. While ecommerce is growing in importance for the brand, the majority of sales are still made in brick-and-mortar retailers.

Malhotra says the ad is already generating considerable buzz. “We’re a new and young brand targeted at a young generation, and so obviously we’re all about experimentation,” she adds. “We know that not everything we try will be successful, yet we’re committed and energized to be creative, push boundaries and inspire change that’s good for the brand, consumers and the planet.”