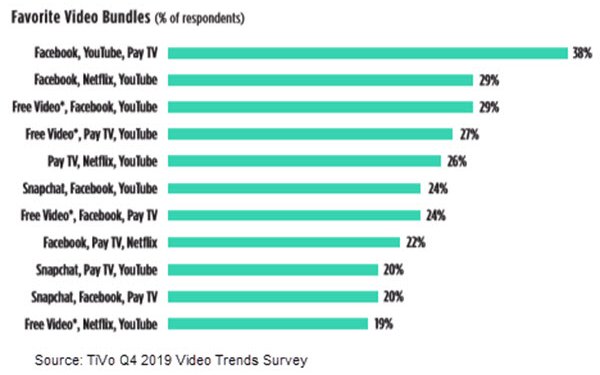 Consumers’ favorite streaming bundles include one or more ad-supported services, and YouTube and Facebook dominate the AVOD usage, according to TiVo’s just-released Video Trends Report for Q4 2019.

The report, reflecting a survey of more than 6,000 viewers ages 18 or older in the U.S. and Canada, found that the most-used bundle (38% of respondents) consists of Facebook, YouTube and pay TV, followed by Facebook, Netflix and YouTube (29%), and free video (from network sites or apps) combined with Facebook and YouTube (also 29%).

All 11 of the top bundle choices (above) include at least one AVOD service.

However, AVODs command just 15 minutes per day of viewers’ time, on average, versus 76 minutes for SVOD, 58 for vMVPDs, 57 for sports streaming, and 33 for social media platforms.

In terms of how many viewers watch at least one hour per day, live TV barely edged out OTT, at 57% and 56.3%, respectively.

Nearly 36% watch an hour or more of live sports/sporting events from cable/satellite providers, while 20% do the same with sports content from streaming services.

Eight of the nine mobile video apps from TV networks tracked in the survey showed at least a 1% to 2% decline versus 2018 in percentages of respondents reporting using them. The exception was NBC’s, up by less than 1%.

U.S. respondents want an average of 22 channels in their TV packages, and are willing to pay $33+ per month to access them.

A third (32.5%) of all respondents indicated they’re not interested in the ability to choose the individual channels they want to watch.

Of these, 30.5% said there are simply too many channels to choose from, 26.4% said the process of choosing à la carte elements would take too long, and 23.9% said they’d prefer their video service to choose for them based on previous viewing habits.

Nearly three quarters of all respondents (72%) want the ability to view, browse and search available content from a unified experience or interface.

While the number of survey respondents reporting they subscribe to cable/satellite service has decreased year-over-year, nearly 77% are holding on.

Eighty percent of those planning to cut the cord cited cost as the reason (down from 70% in 2018), 17% said they will move to using just an internet streaming service (vs. 14% in 201), and 39% said they will go to using only an antenna to get basic channels.

Asked about this gap, TiVo said that, after analyzing the response volumes in the previous reports, it “took measures in the latest version to ensure that most, if not all, the questions were mandatory... This of course led to a much higher volume of responses to the questions around service usage,” driving up the average. The new method “also means the averages here moving forward are much more valid,” the company maintains.

The new numbers for previous years were recalculated using the same baseline number of responses.

TiVo also argues that, while seven services per respondent may seem excessive, it’s “not all that crazy” when the "hundreds" of AVOD services on the market are taken into account. The survey also doesn’t make any distinction between long-form and short-form video content, “which likely boosts the average a bit,” the company says.

* Some of the percentages cited in this sentence were misattributed by TiVo in the graph in its original report. The sentence now reflects TiVo's corrected information.