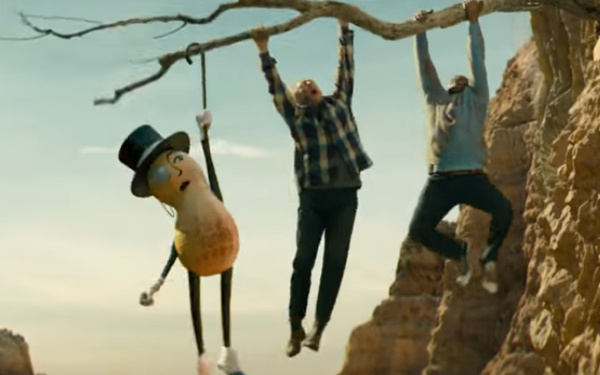 Mr. Peanut apparently won’t be watching himself during the Super Bowl next month, having died at age 104 in a crash of his NUTmobile while saving his friends, actors Matt Walsh and Wesley Snipes.

This would appear to be good news for snack competitors Doritos, Pringles, Snickers and many others who are hoping to command the snacking spotlight during the Feb. 2 broadcast from Miami.

Video evidence of Mr. Peanut’s demise comes via this 30-second, pre-Super Bowl spot, which was posted on YouTube today. The footage shows Mr. Peanut, Walsh and Snipes on a “nutty adventure” drive in which Mr. Peanut swerves to avoid a critter on a rural road. The NUTmobile swerves off the road and plunges into a canyon below.

Fortunately, the three manage to cling to a tree branch just off the roadway until it begins to break, at which point Mr. Peanut lets go—ending up in the canyon near his vehicle, which then explodes.

His funeral will be televised in a third-quarter Super Bowl spot, according to Samantha Hess, Planters brand manager at Kraft Heinz. “It’s with heavy hearts that we confirm Mr. Peanut has passed away at 104 years old,” Hess said in a statement.

The NUTmobile crash ad was produced by VaynerMedia and features the song “(I Just) Died in Your Arms” by Cutting Crew in the background.

It was not immediately known whether the doomed trio were in proximity to the Western town called The Cool Ranch, where actor Sam Elliott and rapper Lil Nas X have been prepping for their own Super Bowl appearance, in a first-ever showing for the newly revamped Doritos Cool Ranch flavor that will also include singer Billy Ray Cyrus.

On Jan. 17, Doritos posted a 60-second Super Bowl teaser spot on YouTube in which a grim-faced Elliott is seen entering a bar at the ranch reciting lyrics from the Lil Nas song “Old Town Road.” A silent and menacing-looking Lil Nas is shown arriving at the ranch on a horse festooned with blaring speakers.

Not to be outdone by salty snacks, Snickers has posted teasers created by BBDO New York and AMV BBDO in which people digging at a construction site talk about the modern world’s everyday annoyances that brought them there—including  selfie sticks, robocalls and social media trolls.

“We live in a world today that feels out of sorts and we have a big idea to do something about it,” Snickers brand director Josh Olken said in a statement. “Will it work? Who knows! But I think fans will enjoy our approach to fix it all that will be revealed in the full Super Bowl LIV commercial.