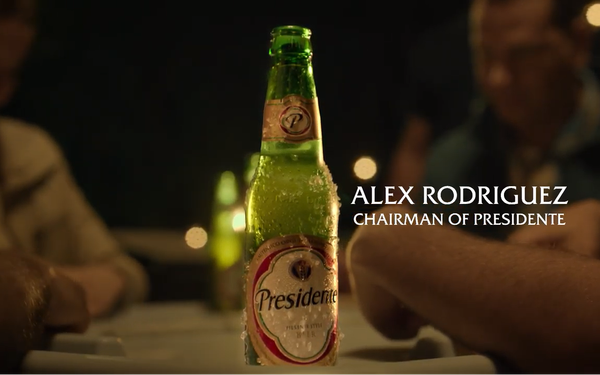 Only one is actually in the big game—a spot featuring former MLB star Alex Rodriguez for Presidente, which is backed by Anheuser-Busch. Pro Skateboarder Paul Rodriquez is fronting a spot for Saint Archer Gold that will appear regionally on Game Day.

The ad with Alex Rodriguez, will announce his new role as Chairman of Presidente USA. This is Presidente’s first-ever Super Bowl commercial.

The “Never Left” creative, developed with draftLine NYC, features A-Rod celebrating his Dominican roots and culture along with images of his Miami hometown and friends. Rodriguez is said to have played a major role in the development of the spot, including the location selection, creative direction, and even had several of his family members and close friends join him on camera.

Rodriguez, also a baseball commentator on ESPN, is set to help grow the Presidente brand presence in the U.S. over the coming months.

“Telling my personal story on why this partnership is unique, during one of the biggest sports events of the year, is humbling. And I can’t wait to share the pride and passion of the DR, and Presidente, for years to come.” stated A-Rod.

Paul Rodriguez is raising awareness for Saint Archer Gold in a spot that shows the skateboarder, who is the cofounder of the brewery, whistling the 80s song “Patience” by Guns and Roses as he skates to several bodegas and grocery stores searching for his beer. His journey pays homage to the brewery’s San Diego roots by showing familiar locations, like the city’s pedestrian bridge. The ad, developed with agency Preacher, ends with the message “Introducing a new light beer worth holding out for.”

Sunday’s media buy runs regionally in 70+ markets. Parent company Molson Coors, which acquired a majority stake in the premium light beer in 2015, is using Game Day as part of a $20 million advertising budget to bolster awareness for the brand.