Back For Bubly, Michael Buble Still Disagrees With Brand Name 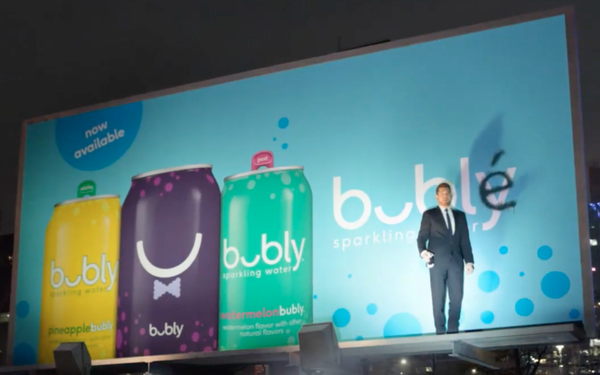 But Bubly decided to skip this year’s advertising/football spectacle in favor of a new television ad with Bublé that broke today and continues his obsession with the way Bubly is pronounced -- the and way he thinks it should be spelled.

In last year’s Super Bowl ad, the Canadian-Italian singer interacts with a store employee and customers as he insists on pronouncing Bubly the same way as his name. In a subsequent spot, he sits on the floor of the store surrounded by cans of Bubly -- on which he has crossed out the letter y with a felt marker and replaced with an é.

The TV ad that began running today on national networks and digital platforms shows Bublé standing high on an outdoor billboard as he spray paints his é change on the brand name while a crowd gathers below. One of two police officers mistakenly pronounces Bubly the way Bublé does, and that’s just fine with PepsiCo.

The goal is to get people talking about one of many brands trying to make a splash in the water category, according to Bubly vice president of marketing Stacy Taffet.

“Last year’s Super Bowl was really a turning point,” Taffet tells Marketing Daily. “It was a new brand, not even a year old, and we did the Super Bowl ad and our awareness went up 41%, and sales dramatically increased after that.”

Bubly’s target audience is Millennial and Gen Z consumers Taffet describes as “Generation Play. They are very much looking for enjoyment beverages that are different than maybe a generation ago. They do not drink as many traditional carbonated soft drinks.”

She won’t talk about specific market share, but says Bubly “is one of the fastest growing, and becoming one of the largest, brands in the category.”

The latest ad comes from the Direct Focus agency, with TV media placed by OMD.

Asked about upcoming iterations of Bubly and whether PepsiCo has any plans to include caffeine or other trendy additives, Taffet says, “We do have a full innovation pipeline. We’re not quite ready to share that yet.

“We have publicly said we will no longer be in any plastic packaging, and so we are launching a 16-ounce can.”

The 2019 IRI New Product Pacesetters report, which examines top new product launches of 2018, cited Bubly -- with its light carbonation and natural flavors, no sweeteners or calories -- as a “rising star” in food and beverages.