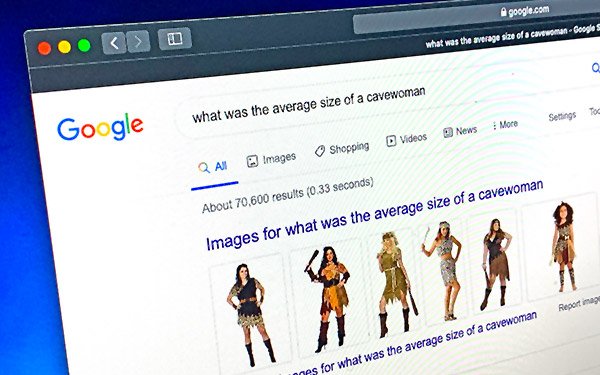 Cristina Lagunas’ nine-year-old daughter used Google in a project on the Stone Age. She Googled “What was the average size of a caveman?” and got the facts from numerous sites. When she asked the same question related to cavewomen, Google returned “lots of SEXY cavewoman outfits,” tweeted Lagunas. “Seriously Google??”

Google Liaison Danny Sullivan immediately stepped in to tell Lagunas he would pass on the search results based on the query to Google developers. He said the results largely reflect that most of the scientific and historic material is written about cavemen, not cavewomen. “It does seem like the initial response she got provided info about both men and woman,” he tweeted in response. “But we can look at this more.”

Sullivan tweeted that further down the page that Google does bring in some scientific information for the word “cavewoman,” including the understanding that caveman and cavewoman should be treated as synonymous.

It seems as if the combination of the words “size” and “woman” in the same sentence, Lagunas tweeted, “can only mean that you want to buy clothes… sexy ones too.”

“Obviously there were only cavemen and no cavewoman!” tweeted Caroline Coch. “#invisiblewoman by @CCriadoPerex was really eye-opening. I can recommend reading it, even though I got very angry after every couple of pages.”

Garbage in, garbage out, so the saying goes. Query results do reflect information and views posted by companies, journals and other publisher sites. Google also has the algorithms to weed out the inappropriate content, including bias results.

Google’s search engine has been criticized for returning biased results on everything from racial and political bias, to returning certain websites based on the content created on a specific subject. In 2018, The Wall Street Journal ran an article how Google workers discussed “tweaking search functions to counter travel ban,” but Google responded by telling the media outlet that none of the proposed changes were implemented.

The Women’s Leadership Network also chimed in, tweeting “It’s marvelous! At least your daughter is asking and expecting a proper answer at a much younger age than many of us.”

Others pointed for Lagunas to compare and contract Wikipedia’s definitions of the words Caveman and Cavewomen, which leads information seekers to the former for a more general definition.